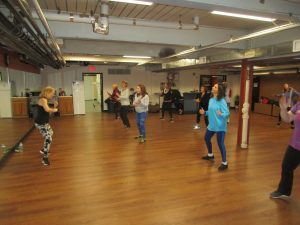 On almost any Friday morning at Addie-Tude Dance Center on the lower level of 42 Memorial Plaza in Pleasantville a group of about 15 women can be found preparing to move onto the dance floor for the start of class.

Instructor Amy Olin asks for the group’s attention, ready to cue up nearly an hour’s worth of lively music with Latin roots or international rhythms.

Olin isn’t teaching a class for aspiring dancers but leads one of the many Zumba classes that are offered throughout the area. As an increasing number of adults, including many in their middle-age or senior years, understand the health benefits of remaining active and fit, multiple variations of Zumba classes have sprung up at not only gyms and health clubs, but dance studios and many other venues that can be used for 45 minutes or an hour.

“It’s good for the muscles, it’s good for the joints, the circulation, mind, body,” said Olin, a former dancer who has taught Zumba classes in the area for about 10 years. “You have to focus so you have to turn everything off. It’s like you don’t have to think about anything else.”

Twice a week, on Tuesdays at 10 a.m. and Fridays at 11 a.m., Olin welcomes people of all ages to her one-hour class, although at her sessions it’s almost always exclusively women, with most in the middle age or early senior years.

She describes her class as low-impact Zumba. There is no jumping, so it is easier on the joints. While Olin’s classes do not have the high intensity of many health club Zumba sessions, it is more physically challenging than Zumba Gold, which is designed mainly for seniors.

Olin said that she’s often looking to balance the needs of the more fit regulars with those who are older or newer to her class. She typically will give verbal and/or hand directions just before each move while a song is being played to help newcomers along, but once her class members learn most of the moves, they can almost self-regulate the intensity.

“Once you know the routine, the more intensity you can put into it,” she said. “Learning it, is just getting it into the muscle memory, but then you can really pick it up and it gets you sweating and your heart pumping.”

Several of the regulars at her Friday session said they are attracted to Olin’s class because you pay as you go, $14 each time you attend. To go to many of the gyms that offer Zumba classes, there’s typically a much steeper monthly membership fee and sometimes additional charges for class.

“You’d be surprised by how many people this age are looking for this kind of exercise,” said one of Olin’s regulars. “What’s attracted me to it is I didn’t have to join a gym. I don’t want to pay $150 a month and only go twice. I like when I can jump in and pay $14 (a class).”

Peggy Raiskums, a Zumba instructor who leads a session at Dance Emotion in Chappaqua on Monday and Saturday mornings, said the sessions held outside of gyms and health clubs are less intimidating.

“In a gym, it’s very competitive,” Raiskums said. “In private classes, it’s not so much, so they have a much better time.”

Others enjoy the emphasis on dancing. Madeleine Accordi of Chappaqua has been coming to Olin’s classes for several years because it’s the right intensity and it’s more fun than focusing on simply burning calories. She also loves to dance.

Briarcliff Manor resident Robin Ginsberg said there’s a purpose behind the routines that Olin presents in her classes.

“Every moment that she gives us, there’s reasoning behind it,” she said. “So you’re not just moving arms around. You’re using certain muscles while you’re dancing.”

Each instructor and each class present a slightly different routine, said Raiskums. Some incorporate jumping jacks and hops, others may use light sticks or weights to present what is called a Zumba toning class, which focuses on toning the body. The dance-oriented classes more closely resemble aerobics training, she said.

The preferences of the patrons are generally determined by their age, Raiskums said.

“Younger people like to have a younger instructor and they really like to have a high-intensity class while someone who is older, they don’t like to have as high intensity,” she said. “If someone’s knees are shot or they had a hip replacement or they have (another) problem, they pick out the class that suits them, but everybody can go to a Zumba class.”

Raiskums said that when she started leading Zumba classes there were many couple who would attend, but over the years, for whatever reason, it has been looked upon as a woman’s activity. She said it’s been at least a few years since she’s had a man in one of her classes.

Not only does Olin enjoy bringing her low-impact sessions to her attendees but for the regulars there has been a camaraderie that has developed among her class members. Some have become friends and socialize away from the class and there’s a group that goes to lunch together on Fridays when the class ends at noon.

“It becomes a community when people come all the time,” Olin said.