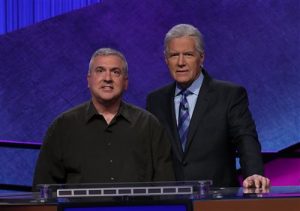 The finals of the tournament, which started with 15 contestants, aired on Channel 7 last Thursday and Friday and pitted Barcomb, who won $100,000 in May after winning the Jeopardy! Teachers Tournament, against James Holzhauer of Las Vegas, Nevada and Emma Boetcher of Chicago, Illinois.

Holzhauer, 35, a professional sports gambler who won $2.7 million during a 32-game winning streak that spanned from April to June, won the Tournament of Champions and the $250,000 top prize with a two-day total of $76,923.

Boettcher, 27, a user experience librarian who ended Holzhauer’s streak, captured the $100,000 second prize with a total of $65,000, while Barcomb, 50, who teaches physics to juniors at Hendrick Hudson and lives in New Paltz, was only able to amass $5,000 in the finals.

“James Holzhauer and Emma Boettcher were tremendous competitors and played so well in the finals. I wish I had been able to buzz in faster and answer more questions, but they were too good,” Barcomb told Examiner Media in an email. “I felt like beating one or the other would be very difficult, but playing both made it near impossible. I feel like I played two of the greatest in the history of the show. Overall, I am grateful for being given the opportunity to live out a dream and compete against some of the best ever.”

Barcomb said prior to being chosen for the Teachers Tournament he had interviewed twice but wasn’t selected.

“I have been a fan of Jeopardy! since Alex Trebek took over hosting duties in 1984. My family has always enjoyed Trivial Pursuit and my siblings and I have occasionally competed in pub-style trivia contests,” he stated. “When I settled down and started teaching at Hendrick Hudson some years ago, I started taking the online test. Last year I turned 50 and I told myself that if I don’t get on this time, I would take the hint and stop trying. But they invited me to the Teacher Tournament, and the rest is history.”

“The crew are so professional that everyone was put at ease while recording was happening. It was a whirlwind, as we played 10 matches in two days each time,” Barcomb added. “The second time, I knew what to expect and so I feel I had a small advantage over those who hadn’t done a tournament. All of the competitors were fun to talk to and play against. Everyone was pleasant and seemed to enjoy the tournament. We got to meet most of the families and talk about our varied experiences with the show.”

“Dr. Francois Barcomb made all of us proud, as he represented Hen Hud on a national stage,” Hochreiter stated. “He provided us with some thrilling television moments as he advanced from last spring’s Teacher Tournament to the Tournament of Champions final round, going up against formidable competitors, including one of the highest winners in the show’s history. Dr. Barcomb has demonstrated that hard work and perseverance pay off, which is a wonderful real-life lesson for his students, both past and present.”

Board of Education Vice President Barbara Pettersen also praised the 14-year Hendrick Hudson educator, saying, “I think that Dr. Barcomb was up against amazing rivals and we are extremely proud of him and of his outstanding accomplishments on Jeopardy!”