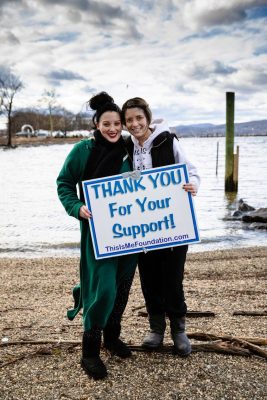 Like many annual events that were cancelled due to the coronavirus pandemic, the New Year’s Day Polar Plunge at the Riverfront Green in Peekskill that raises funds for a local nonprofit organization will not be taking place.

However, sisters Lauren and Caitlin Brady, who were each diagnosed with alopecia areata, an autoimmune disease that causes hair loss while attending Peekskill High School and created the This Is Me Foundation in 2011 to bring awareness to the cause, remain focused on their mission.

The Brady sisters are accepting applications for scholarships they award each year for graduating seniors at Peekskill, Hendrick Hudson and Walter Panas high schools. Their fundraising received a boost on Giving Tuesday in December where more than $1,300 was pledged on the Facebook campaign.

“Though Caitlin and I are disappointed to not have the Plunge on January 1st, we know we made the right decision. In the end, the safety of our plungers and spectators is our main concern,” Lauren Brady said. “We appreciate the outpouring of support we have received since making this announcement and are already counting down to the 9th Annual Polar Plunge taking place on January 1, 2022.”

“Due to the tremendous amount we have received this year, we were able to announce our 2021 ‘This Is Me Scholarship, Inspired by Ryan Risco and Cait Chivonne Polhill’ program without decreasing the number of scholarships available,” she added. “We look forward to awarding these scholarships in the spring and to add on to the 73 scholarships that have been awarded since 2012.”

Locally, up to three $500 scholarships are available at the three high schools for seniors who are pursuing advance level education and have faced/overcome adversity or helped others through adversity.

Nationally, four additional $500 scholarships are available to graduating high school seniors in the United States who are pursuing advance level education and have/had alopecia. Seniors can apply at www.thisismefoundation.com. More information can be obtained by sending an email to info@thisismefoundation.com.

In January 2011, after watching Miss Delware 2010, Kayla Martell, take her wig off and explain she would compete in the 2011 Miss America pageant wearing a wig, as she too had alopecia, the Brady sisters decided they needed to do something to inspire others just as Martell had done for them. Three weeks later, on February 12, 2011, “This Is Me” was born as a two-and-a-half minute YouTube PSA. The video was created to not only raise awareness about alopecia, but to try and inspire anyone who faces any insecurity.

The first Polar Plunge, where participants strip down to their bathing suits and run into the frigid waters of the Hudson River, on January 1, 2013 attracted 11 brave souls and raised $2,400. In 2018, a record-setting 80 participants raised more than $13,500.

Lauren Brady said the organization receives donations throughout the year, some from merchandise sales. Donations can be made on the website or on its Facebook page.