Skip to content
The Examiner
January 27, 2015 Martin Wilbur
We are part of The Trust Project

Cuomo, who delivered a nearly hour-and-a-half address in Albany last Wednesday afternoon where he also unveiled a proposed $150 billion 2015-16 budget, laid out an ambitious agenda which includes substantial money for infrastructure projects and a bold social agenda, that among other things, would significantly raise the minimum wage.

However, several local lawmakers talked of their disappointment and frustration that a proposed $1.1 billion increase in state aid for education will come with a series of conditions that are likely to be met by stiff opposition from both sides of the aisle and possibly alienate teachers’ unions.

State Sen. George Latimer (D-Rye) said that the state is “accelerating down the wrong road on education.” There were no plans offered to eliminate the Gap Elimination Adjustment, which reallocated a portion of education funds to close a state budget gap under former governor David Paterson, and does not project levels of school aid.

Furthermore, Cuomo’s education plan bases half of teachers’ evaluation on standardized test scores when there is already excessive mandatory testing, Latimer said. The “one-size-fits-all approach,” which lumps the challenges of urban districts with suburban districts, is misguided.

“The majority of Westchester’s school districts do not need these changes — they are performing at a high level of excellence already,” Latimer said. “And I certainly don’t think the problem with our results with students falls primarily on the teachers.”

Latimer said he intends to support some local and regional projects that have been proposed such as mixed-use developments at Metro-North train stations, reducing the net income tax on small businesses from 6.5 percent to 2.5 percent over three years and adding a renter’s credit to tax relief provisions when a community complies with the tax cap.

Assemblyman Thomas Abinanti (D-Pleasantville) was even more forceful in his disdain for many of Cuomo’s education plans, but also criticized the governor’s failure to directly help property taxpayers.

The $1.1 billion in extra education aid would go a long way to easing local homeowners’ burden, but Abinanti said conditions such as delaying the granting of tenure to teachers to five years, offering a $20,000 bonus for higher performing teachers and emphasis on test scores won’t improve education.

“He’s diverting the money for the kids’ benefit and that’s not right,” Abinanti said. “We all know that more money is needed and he’s failing to provide the proper funding.”

The assemblyman said if tenure is extended to five years that would make some teachers vulnerable to the whims of districts, which could keep on taking in probationary instructors. Also, schools wouldn’t benefit from teachers competing against each other for a bonus.

Senator Andrea Stewart-Cousins (D-Yonkers) said she was happy with the “legitimate conversations” the governor’s speech would encourage and that that alone was a step in the right direction for bipartisan communication. “Talking about how to improve our student outcomes in this competitive world is important,” Stewart-Cousins said on a local Albany cable interview. She agreed with Cuomo that good teachers should be incentivized and that bad teachers should be removed from the classroom.

Stewart-Cousins also acknowledged that while she was supportive of the increase in the minimum wage ($10.50 per hour statewide and $11.50 per hour in New York City), she felt it would be difficult to pass through the Republican controlled Senate and that it was not strong enough for the Working Families Party that had supported both her and the governor for election.

Assemblywoman Sandy Galef (D-Ossining) said she was pleased with the more than 4 percent boost in spending. As a longtime supporter of a circuit breaker to help property owners, she also supports that initiative and the property tax credit programs.

Galef also agreed that it is worthwhile to use $5 billion in legal settlements on infrastructure projects.

But Galef said she was hesitant to support the expansion of charter schools–with the ceiling being raised from 460 to 560 charters statewide — and a new teacher evaluation system in which 50 percent of the evaluation is students’ performance on standardized tests.

State Sen. Terrence Murphy (R-Yorktown), in the capital for his first State of the State address, praised Cuomo’s proposals to lower the small business tax rate to 2.5 percent over the next three years and improve the state’s infrastructure, which should help to create jobs.

He also complimented the governor for using the $5 billion legal settlement to pay to repair crumbling roads and bridges and make investments in new water and sewer systems.

“There are several worthy infrastructure projects in the Hudson Valley that I commend the governor for presenting and will work in a bipartisan manner to generate support for them,” Murphy said.

However, he said he wants to see the Gap Elimination Adjustment, which he called a “scheme” that took 5 percent of school funding away in 2009, eliminated. The GOP Senate Majority Conference plans to make that a major push this session, Murphy added.

The most caustic criticism came from Assemblyman Steven Katz (R-Yorktown), who called Cuomo’s agenda an “ultra liberal screed that is intended to try and prop him up as a presidential contender.”

“I think that he has done nothing to eliminate the barrier that there are for businesses to come in and thrive,” Katz said, noting the only reason the budget may be balanced is the money from the $5 billion settlement.

Pat Casey and David Propper contributed to this article. 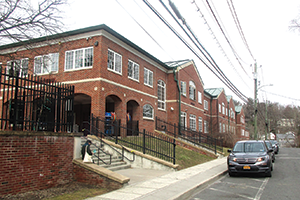 ‘It Will Be a Challenge’: Pleasantville Traffic Plan to Alter Elementary School Pick Up