Skip to content
The Examiner
April 15, 2019 Martin Wilbur Westchester County
We are part of The Trust Project

County Executive George Latimer delivered a message of tolerance and inclusiveness while touting his administration’s steps to ensure a strong Westchester economy during his second State of the County address last Thursday in White Plains.

In his 75-minute speech, which was one of the longest by a county executive in recent memory, Latimer recited many of his administration’s accomplishments, from making sure that Westchester residents look out for one another to overseeing an increasingly robust economy.

“Being tolerant and compassionate is not merely a social good. It is the foundation for creating a safe living environment where we can all achieve and thrive,” Latimer said. “My friends, inclusion and cooperation is good economic policy.”

He announced that he will be hosting a roundtable discussion with the county’s religious leaders to discuss acceptance and tolerance through religion and conversation.

Latimer said he will also rely on the leadership of organizations such as the county’s Youth Bureau, Office for Women and a re-energized Human Rights Commission to help him and law enforcement support civility.

A strong economic climate requires fresh investment from entrepreneurs willing to take a chance, Latimer said. He said his administration has been using strategies at its disposal to encourage new projects.

The county has reinvigorated the Minority and Women Business Enterprise Program (MWBE) and introduced the new Element 46 program designed to provide entrepreneurs who are developing new businesses free mentoring and professional and team-building services, Latimer said.

Latimer said recent preliminary approvals by the county’s Industrial Development Agency for key redevelopment projects featuring mixed-use residential and retail – the White Plains Mall redevelopment and the former Westchester Pavilion Mall – will also help the county. Those projects will see more than $1.2 billion in private investment that will create more than 3,000 construction jobs and over 500 full-time and part-time positions, he said.

“The bottom line is this – we need to attract businesses and keep businesses here in Westchester County to keep our economy thriving,” Latimer said. “When our businesses thrive, our county thrives and we want to partner with those businesses, large and small to meet their employment and technology needs.”

In January, Latimer signed the agreement for North 60 near Westchester Medical Center, in what will be the largest project in the county in decades. It will feature about two million square feet of biomedical and research space along with a hotel, retail and a life sciences museum. He acknowledged his predecessor, Rob Astorino, for doing much of the heavy lifting for the project.

To help with the county tax burden, Latimer said his office encouraged municipalities to find ways to save taxpayer money through the state’s Shared Services Program.

His proposal to raise the county sales tax 1 percent to 8 3/8 percent, will raise an estimated $140 million in a full year, about $40 million of which will be shared with municipalities and school districts. In exchange, there would be no property tax increase for 2020 and 2021.

The state legislature passed the resolution allowing for the higher sales tax and it awaits Gov. Andrew Cuomo’s signature.

Latimer said that his administration is focused on critical infrastructure projects, such as fixing deteriorating roads, using $1.8 million to reduce the number of bridge strikes on the Hutchinson River Parkway, renovating the Elijah Miller House in North White Plains and developing 74 units of senior affordable housing at the old WestHELP site.

“That’s hardly a start, but like the Miller House and the Sprain Ridge Pools, we believe in saving things worth saving,” Latimer said. “We understand the cost of things and we understand the value of things.”

Multiple environmental initiatives have been stressed such as the creation of a Climate Crisis Task Force, emphasizing solar power and electric county vehicles, encouraging textile and food scrap recycling and the installation of 30,000 LED bulbs countywide, he said.

Latimer also announced that the county is looking forward to an exciting summer season at Playland, topped by a new roller coaster named Coaster, the amusement park’s mascot.

The county executive said he is bullish on Westchester’s future.

“Ladies and gentleman, for all of this and more, the state of our county is progressing, modernizing and achieving,” Latimer said. “And it is our unity and collegiality that opens the door to greatness. We as a county have not yet reached where we want to be, or where we need to be, but we are advancing – and we are doing it together.”

Minority Leader John Testa (R-Peekskill) was the most critical of Latimer’s address, saying it had “the least amount of detail and information” of any state of the county in the 10 years he’s been on the Board of Legislators.

“It was a wonderful thank you to a lot of people and a lot of groups, which is always a good thing, but it lacked the substance I was looking for in two areas – the airport and Playland – which I believe are the two main issues facing the county,” Testa said.

Testa said while Latimer acknowledged that Westchester is still the most expensive county in the United States, his refusal to consider the plan to have a private operator take over the county airport is costing taxpayers.

“There are millions and millions of dollars sitting there to be used to combat tax increases,” he said. “None of that was mentioned.”

Meanwhile, he said it appears the administration is not going to follow through on the agreement for Standard Amusements to take over Playland with the introduction of a new ride. If Latimer nixes the agreement, then the county will potentially face even more costs with a likely lawsuit.

Two Democrats, Kitley Covill (D-Katonah) and Michael Kaplowitz (D-Somers) had different takes, saying that he emphasized the administration’s accomplishments. Covill said she would have liked to heard Latimer speak more of how his purchasing strategies is not only helping the environment but saving taxpayers money. The purchase of 78 hybrid buses to save the county about $1 million a year is one example, she said.

“The point of purchase is where we realize our efficiencies, not point of use,” Covill said. “That has become a real mantra for this administration.”

“I think some great points were made,” she said. “I think that we’re really trying to work on items that really need to be addressed. We are working together. We may not always agree but we do have everybody’s constituency at heart.” 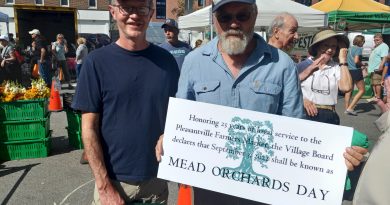 Pleasantville Farmers Market as Popular as Ever 25 Years Later