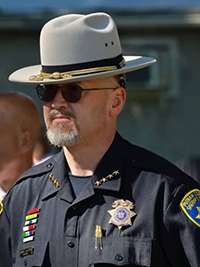 During the June 17 meeting, the Protective Services Committee announced the county will return its two marine patrol boats to the New York State Parks, Recreation and Historic Preservation stemming from the Legislature having eliminated $45,000 for the service in the 2021 budget.

Despite the cuts, the Sheriff’s Department submitted budget requests for tune-ups for the boats, a move which Legislator Ginny Nacerino, chairwoman of the committee, described as an act of blatant defiance.

“Those requests were ultimately denied,” Nacerino said. “It was our hope and expectation that there would be respect and cooperation from the Sheriff’s Department.”

In addition, Legislator Neal Sullivan accused the sheriff of being “unprofessional” and disregarding the intent of the Legislature.

Langley stated not having the water vessels will “absolutely” have an effect on public safety in Putnam waterways.

“The Carmel Police Department does provide emergency and law enforcement services on Lake Mahopac. However, they have an ailing boat that has already broken down several times in this young boating season. They depend on the Sheriff’s Office for mutual aid and shared services when unavailable due to mechanical issues or staff shortages,” Langley explained. “The Cold Spring and Garrison Fire Departments have small vessels available for emergency response, however the Sheriff’s Department is the primary agency for law enforcement of the waters on the Hudson within the borders of Putnam County.”

“The volunteer fire departments have no police authority and in fact cannot conduct police investigations into boating accidents, drownings, criminal activity, or other incidents requiring the same. Nor can they conduct safety checks of boaters on the river,” he added. “The fire departments are a tremendous asset when needed to respond to emergencies if available but provide no proactive services. They are reactionary at most.”

“The mere presence of the Marine Patrol in these waters is critical in ensuring that boaters operate their boats safely and legally,” Langley said. “Without the Sheriff Department’s Marine Patrol Vessels, what police agency will respond to emergency calls on the Hudson River in Putnam County?”

The Marine Patrol Unit was established on the Hudson River and Lake Oscawana in 1998 by then-Sheriff Robert D. Thoubboron to patrol those bodies of water in Putnam County. Langley said New York State Park’s Department provided the boats that the Sheriff’s Office use at no cost to the county with the stipulation that it patrols the Hudson Valley waterway.

Although the Marine Unit has always been funded by overtime, Langley maintained the state reimbursed the county 50% of the overtime costs required to provide public safety.

“The Protective Services Committee meetings cannot continue in this manner. If Legislators Sullivan and Nacerino are going to spend a half an hour attacking the Sheriff’s Department in a public forum over something as trivial as docking a vessel in the Hudson River for emergency response without even contacting this office for an explanation, then future meetings will remain counterproductive,” Langley stated.