Skip to content
The Northern Westchester Examiner
June 17, 2020July 8, 2020 Martin Wilbur Yorktown
We are part of The Trust Project

Lakeland School District alumni and students were joined by community members for a protest march and rally Tuesday afternoon to demand changes to weed out systemic racism in the school system.

Chanting continuous slogans, several hundred people marched from the Shrub Oak Shopping Center, headed into the Lakeland High School campus before circling back out onto East Main Street and to the administration building where various speakers urged reform.

Empowered by the protests that have erupted since the May 25 killing of George Floyd by Minneapolis police, the crowd pressed for more anti-racist curriculum, a district antic-racist policy, more people of color among the faculty and staff and to provide resources to help combat racism in the community, said Amy Belfer, a 2015 Lakeland High School graduate and one of the organizers of the event that drew participants from widely divergent backgrounds.

Alexia Libretti, another organizer and Lakeland High alum, said change must start at the local level, and while there has been progress made around the country in recent weeks, there is still much work to be done.

“The whitewashed history that we learned is not the history of America and it is up to us to find the truth and not to burden our black friends by asking them to help,” Libretti said. “We can become better by listening, by truly hearing them and being empathetic toward the hardships that we will never understand.”

Graduates, mostly from the past five years, along with a member of the Board of Education, a couple of teachers, and several community members exhorted the crowd to force administrators and the school board to listen until changes are made. A number of the speakers were people of color who related incidents of subtle and overt racism while growing up in the district. Yorktown Supervisor Matt Slater and council members Alice Roker and Tom Diana were also on hand to show support.

Brittany Alexander, a 2018 graduate who currently attends NYU, said she was told by another student when she was in elementary school that he was “going to slap the black out of me” and in later years she would frequently go to the restroom to wet her hair in order to straighten it to fit in and look like most of the student body.

Even while in the city at college, Alexander said there have been times when she has walked down the street and white people have looked back in fear, apparently assuming that she might target them. When she shops, she has to make sure that her hands are out of her pockets and makes sure to smile at strangers.

“I do anything and everything to make people feel comfortable,” Alexander said. “These are survival techniques my parents taught me because they knew that I would exist differently in the world. Black people have to exaggerate their innocence in order to make up for their blackness.”

Ayanna Gibson, a 2015 graduate, had similar experiences when she attended Lakeland schools.

“I let racist comments about my people slide to make other people more comfortable,” she said. “I was afraid to be viewed as less than. I didn’t think my voice would change their view, so I was silent.”

Other students recounted how there were only a few non-white teachers, which made it more difficult or uncomfortable to seek help on various issues. Jhoely Duque, a 2018 Lakeland High School graduate, urged the district to make changes that were outlined in a petition that has been developed and to be sent to the district’s administration.

The petition calls for a district anti-racism policy that lays out specific goals to combat racism rather than Lakeland’s existing Dignity for All Students Act, which is too generalized. It also demands development and implementation of an anti-racism curriculum, which would include more black art, literature and scholarship, provide more resources on racism and white supremacy and have students of color collaborate on the Curriculum Task Force,

Duque said the petition also urges the district to prioritize the needs of marginalized communities. That would mean hiring a more diverse teaching staff, appointing a diversity and inclusion coordinator and to embrace inclusion in the district’s mission statement.

According to Public School Review, which outlines the demographics of public schools in the state, Lakeland High School is 27 percent minority with the majority of those students Hispanic.

On Wednesday, The Examiner reached out to Superintendent of Schools Dr. George Stone and Communication Director Jim VanDevelde for reaction about the petition’s demands. The district responded by forwarding a link to Stone’s June 13 statement that was posted on its website and e-mailed to parents.

In that correspondence, Stone agreed with the need to revise curriculum, particularly the way history is portrayed and influences the culture and perpetuation of racism in our country. He said Lakeland is joining a coalition of districts that are lacking in that area and will collaborate on establishing a task force this to make recommendations at the local and state levels for change in all areas of education.

Stone also wrote that he recognized the need to provide increased social and emotional support systems for minority students.

Furthermore, Stone said,it is the district’s responsibility to denounce racism, prejudice, hatred, and bigotry in all forms embrace the rights of all citizens and groups to peacefully protest injustices; encourage an environment where all opinions can be heard and discussed without fear of retribution; and pledge to use resources to continually improve school climate, culture, curriculum, extra-curricular activities, and staff recruitment practices to ensure equity.

“All of these are ideals we have continually advocated for,” Stone stated. “Here once again, I publicly state them and emphasize our total commitment to helping every student succeed and to support positive social reforms in order to build a better community and nation.” 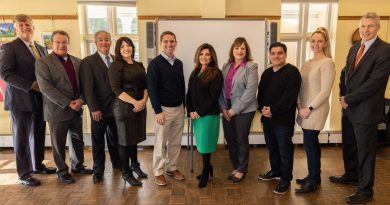 Forum Discusses Bill that Would Discipline Prosecutors for Misconduct