Skip to content
The Examiner
June 19, 2019 Martin Wilbur Mount Kisco
We are part of The Trust Project

A developer who has sought to build a 129-unit assisted living facility in Mount Kisco filed another lawsuit against the village in state Supreme Court last week claiming officials have reneged on an agreement to sell the land.

Brian Brick, an attorney representing development partner Robert Mishkin, outlined in the June 11 filing that the village remains obligated to sell to his client the 17.7-acre parcel at 270 Kisco Ave., a transaction that was stipulated as part of a settlement between the parties stemming from a 2002 federal Fair Housing Act lawsuit against Mount Kisco.

The 2002 lawsuit was prompted because Mishkin’s entity, Town & Country Adult Living, had hoped to expand an assisted living facility at 53 Mountain Ave. but was unable to obtain a necessary variance for the expansion.

Brick said last week that the village continues to hold a $1.5 million contract down payment from Mishkin that he paid in 2007 and encouraged him to demolish the facility at 53 Mountain Ave. in 2011 because plans were progressing for the new project on Kisco Avenue.

However, the village has refused to move forward with the sale of the Kisco Avenue property even after a Mar. 13, 2017, unanimously approved Village Board resolution that authorized the transaction, Brick said.

“After thirteen years of Defendants’ delays and pervasive bad faith, the Village has to make a choice – either (a) it can sell 270 Kisco Avenue to Plaintiffs and issue Plaintiffs site plan approval, or (b) it can undo the deal and return to Plaintiffs their $1,500,000 down payment, title to 53 Mountain Avenue, and adequate restitution for having had Plaintiffs close and demolish their existing business at 53 Mountain Avenue,” the lawsuit states.

“You can’t have it both ways. You can’t keep it all for yourself and say ‘Oh, we consider our obligation over and done with,’” Brick said.

The suit demands a jury trial seeking unspecified damages to be determined at trial and punitive damages.

Village Attorney Whitney Singleton said on Monday that the plaintiff’s claims are “wholly inaccurate.” He said Mishkin failed to live up to various required obligations related to the application and that the plaintiff authorized release of the deposits he made to the village because of his failure to comply with those obligations.

Mishkin also sold his property on Mountain Avenue property and relinquished all of his contractual rights to another entity, Hearth at Mount Kisco, LLC, in 2012, Singleton responded.

After several years, the applicant had failed to secure New York City DEP approvals and could not close title to the Kisco Avenue property until that was obtained. Mishkin then brought in another investment group, HFZ Capital, in hopes of advancing the project.

“The village was tired of having contracts which weren’t closing and the Village Board indicated to him that we would close if there were no contingencies and there were no further delays,” Singleton said. “He would not agree to that.”

Singleton said that there have been multiple lawsuits filed by the applicant over the years, all of which have been lost or withdrawn.

“The attorney is not familiar with the true facts of the case,” he said.

Brick, who has represented Mishkin since 2017, disputed that statement. He said his client withdrew a case in state Supreme Court when it appeared that the village was interested in moving forward with Mishkin and his new investors, HFZ Capital in late 2016 and early 2017.

Another suit, filed in federal court, was deemed to be unripe because the judge stated that the village had not yet determined the outcome of the application, Brick said. 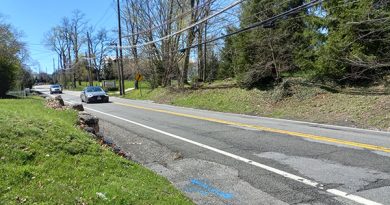