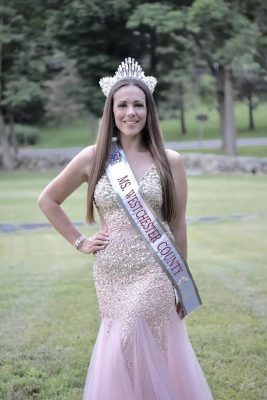 Nicole Sibiski of Jefferson Valley will be representing Westchester County in the East Coast U.S.A. National Finals pageant this weekend, and she’s out to prove she’s not just a pretty face.

A fourth grade ESL teacher in the Ossining School District, Sibiski, 38, a mother of three, is looking to use her public exposure to bring attention to her platform of literacy and helping students with behavioral issues and from low-income households succeed.

“If we can work with them and see what makes them happy, we can teach children to better themselves,” Sibiski said. “I look for pageants that are more about intellectuality.”

Sibiski, who has lived in Jefferson Valley since 2010, is no stranger to pageants, having held a few titles as a youngster in her native Puerto Rico, where she also did some modeling and acting. She put that part of her life on the back burner as she earned a college degree, with honors, in sociology and education and started a family.

“It’s been fun. It’s something I’m really looking forward to,” she said.

Between 1,500 and 2,000 people are expected at the National Finals from July 26-28 at the Hilton in Parsippany, NJ. Sibiski will be competing in a variety of categories, including beauty, speech, runway modeling, fitness and talent. There’s also a mother/daughter event that she will be taking part in.

Cash and prizes, and, of course, bragging rights will be up for grabs. Sibiski knows she will be one of the older contestants, but she’s confident her experience will make her a contender.

“It’s exciting. I don’t want to go out there and just be rewarded something,” she said.