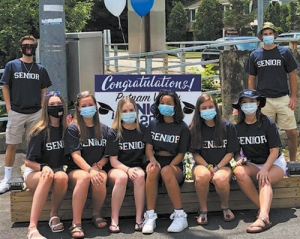 The Class of 2020, including these seniors from Putnam Valley High, deserved a far better fate than the hand they were dealt.

After perhaps the most puzzling week in our nation’s history, I’m nearly at a loss for words. For the first time in more than three decades as a local sports enthusiast/columnist, I don’t know what to say about the state of our great nation; sports, health, politics or otherwise.

This particular take may not age well at all, but I’m sick and tired of coming straight home to nothing but the unequivocal love of my beautiful wife and children, which, I promise, is something I’ll never take for granted. But we’ve had our fair share of family time during the last three inactive, recreation-free months. And, like so many others during this COVID-19 pandemic, I’ve lost a portion of my livelihood and income I hope to recoup down the road.

More than that, though, my mental and physical well-being is at stake as we remain in this uneasy lockdown. Luckily, my kids have adjusted from student athletes to house cats, or I’d have driven them crazy without the local sports circuit soaking up much of our time.

We were also denied the Class A title defense of the Walter Panas softball team, missed out on Class AA Mahopac pitcher Shannon Becker’s ballyhooed junior campaign and lost the chance to see if 2019 Class AA softball runner-up White Plains was poised to take that championship leap. Briarcliff was denied the opportunity to start a boys’ lax dynasty after winning it all in 2019. So much was stolen from our kids as we “flattened the curve,” including a raucous prom night and a suitable graduation ceremony.

We didn’t get the chance to see if Rye could challenge both Lakeland on the diamond and Yorktown on the lax green in an attempt to fulfill one of the greatest championship runs in Section 1 history. With football and boys’ hoops titles already in the hopper, the Garnets were seeking a rare triple crown at the very least this spring.

Love ’em or hate ’em, that would have been fun to witness no matter the outcome, but for this godforsaken lockdown, which has destroyed national morale and kicked the Class of 2020 right between the chops. There will always be a soft spot in my heart for this year’s graduates and those students who were denied a fitting finale for 13 years of grind.

Sports has always helped us weave our way through dire straits. I’d like to think that my son and daughter and I are ready to hit an outdoor batting cage for 45 minutes without the fear of contracting coronavirus from some distant droplets. There’s only so many catches we can have in the yard before they bolt back to Fortnite and shut me out for the rest of the day.

I’d like to imagine my son can shoot some hoops with his friends in a local park because there’s only so many games of Around the World and Horse that we can kick each other’s @$$ in, though the old man still owns a distinct advantage. I’d like to believe that it’s time to re-open America because I’m tired of just accepting information from people who may or may not be accurate regarding COVID-19. (Where is the #ScarfLady?)

I’m a grown-ass man and I’m ready to utilize my common sense to protect my family and those around me. Locking me down for an entire summer – with no baseball in sight – isn’t the answer. I need to see and be part of the local and national sports scene. I desperately need an afternoon at the pool afterward, sipping cocktails and talking sports with family and friends somewhere between three and six feet apart this summer.

Yes, thousands have died since this virus was unleashed this winter, and it’s only been complicated by other situations and the cultural upheaval this country needs to come to grips with and radically change. Reform is certainly in order, but defunding police departments across the country is the last thing we want to do. Lawlessness will ensue, criminality will overrun us and chaos will abound whether you like law enforcement or not (P.S., I do!).

Like sports, society needs rules. Otherwise, drug abuse will flourish and young children will be lured in. Murders will rise. Hooliganism will run rampant at sporting events. Imagine what Raider Nation could be like when it relocates from Oakland to Vegas this fall without proper supervision before and after a tailgate party. Parks and schools will be vulnerable, as will our children.

Think about that. Schools and parks susceptible to unfathomable levels of crime should we defund the police. The antics of a few bad seeds in our criminal justice system cannot take us all down, though they must be addressed and corrected immediately. Can you imagine domestic disturbances without police intervention? Every city that defunds police departments will experience an historic rise in violent crime, so go ahead and do so. I’ll pray that Scooby and Shaggy pull up in the Mystery Machine to handle whatever issues you encounter when local P.D. is defunded. Me? I’ll stay right here in the cozy confines of my town where the current train of thought is driven by safety and logic, and some of our worst fears are hell-bent hockey dads and mean-spirited cheer moms #MommaDrama.

I maintain ballfields for a living and oversee a large town park in Putnam Valley as an occupation that fills my heart with joy, but it pains me dearly to see these pristine fields untouched every day. Bring back the divots, bring back the giant holes alongside the pitching rubber and home plate, give me a dugout full of splintered seeds and scattered water bottles. It’s time to mandate and regulate some rules that will allow our children to flourish in their intended roles. Because living in fear is not an option.

P.S.: Saints QB Drew Brees, who has been a model citizen throughout his NFL career, said all the right things on both accounts; both initially and apologetically. (Google it if you’ve been under a rock.) Had he tied them together in one tidy knot from the onset, nobody could have vilified him for both social reform and patriotism, neither of which should be disparaged.

Have a great week and let’s hope Phase 2 gets our country rocking and our kids back out on ballfields again!