Arts & Entertainment The Examiner
February 25, 2022May 4, 2022 Martin Wilbur
We are part of The Trust Project

Bruce Sabath had previously sung in the sanctuary of Temple Shaaray Tefila, where he is a member, but it’s always been during a major Jewish holiday or for Saturday morning services.

On Thursday, Mar. 3, he will be performing something different in a benefit for the synagogue that hits close to home for him and likely for much of the audience.

Sabath, who has Broadway, Off-Broadway and television credits on his resume, will be doing his one-man show “Searching for Tevye” based on his journey that started as a theater-loving kid growing up in Rochester, continued to Harvard and through a decade-plus career working on Wall Street before making the transition to follow his dream and try to make it as an actor.

As a child, Sabath was well-acquainted with the show “Fiddler on the Roof,” and at about 10 years old the movie was released. It also didn’t hurt that one of his grandfathers was a dairyman in his native Ukraine, just like Tevye, the lead character in ‘Fiddler.’

“So when I became a professional actor after coming back to acting after being in finance and corporate business, Tevye was sort of this idea,” explained Sabath who made is Broadway debut in 2006 in Stephen Sondheim’s “Company,” which won a Tony Award the following year for Best Revival. “That was a role that I really wanted to play, that I had a strong connection to as well as my own family background.”

Before the pandemic struck, Sabath had been performing the acclaimed “Fiddler on the Roof in Yiddish” when he was asked to come to the Rochester JCC by an artistic director of a theater there to do a talk-back and Q&A with the audience about his path to acting and his various ‘Fiddler” roles. Soon after in March 2020 everything shut down and it was during that time that Sabath got the notion to expand his personal story into a one-man show that would become “Searching for Tevye.”

Last November, he was performing it at the New York City nightclub Don’t Tell Momma when fellow members of Temple Shaaray Tefila were in attendance and appealed to Sabath to do a performance for the congregation. The show is also open to the general public.

Sabath’s production will include a three-piece band – a piano, bass and violin – under the direction of Ben Kiley, who was the assistant conductor of “Fiddler on the Roof in Yiddish.” For those looking to attend, there’s an option for to buy tickets to pre-show reception with small bites by Matt Miller Events and a tasting by local wine specialist Bill Tisherman of Wine For All, who will pair wines for the occasion. The performance will be live-streamed.

“I’m really blessed to be able to bring this piece to my fellow congregants, my friends at Shaaray Tefila,” Sabath said. “I’ve sung many times over the years at services both on Shabbat and High Holiday services at various times. So I’m very familiar with singing for this group of people, but it’s really kind of special to be able to bring my own story and bring it here and be able to do it for people I know so well.”

For those attending, wearing a mask and proof of vaccination will be required. The performance starts at 8 p.m. For tickets and additional information, visit www.shaaraytefila.org. 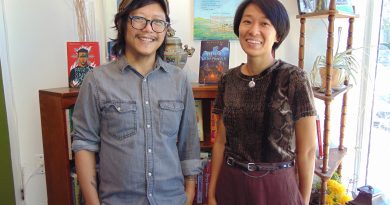