Skip to content
Direct Rays
September 8, 2020 Ray Gallagher
We are part of The Trust Project

Now, folks in Section 1 are awaiting a Sept. 29 start date for low-risk sports like soccer (as if!), field hockey, cross country and tennis to commence this fall. Sept. 21 was the original date to reopen practice fields on campuses across the state, but citing the need to focus on reopening schools during the COVID-19 pandemic, Section 1 delayed the start of the fall sports season until Sept. 29. I reckon we must respect that because getting kids back in the classroom is the primary objective.

Team workouts and practices will be prohibited at any Section 1 school prior to that date. Additionally, a district can choose to delay its season beyond that based on its self-standing desire to do so, so saddle up for what should be a bumpy ride to Day 1, if we ever get there.

There are a ton of hurdles to get past first, the major obstacle being if the schools that do return to a hybrid form of in-school sessions can remain open. The first two weeks of in-session schooling should dictate whether or not low-risk sports are in play at the end of the month. Any spike in coronavirus cases would likely slam the door shut on low-risk sports.

Not having any sports this fall and/or winter would certainly be a slow death for our student-athletes, who have been taxed and shafted since Day 1 of this pandemic. Depression is taking its toll on athletes right now as they sit at home moping about, and who can blame them? Athletes, who would normally be toned and fit as a fiddle in Nero’s ensemble, have already put on their “Freshman 15” a year before heading off to college.

There are already serious rumblings out there in the NYSPHSAA world that our friends to the north in Section 9 – one of its 11 members representing thousands of student-athletes – is debating a move to postpone all sports through Nov. 30, which would take us past Thanksgiving. Section 11 has previously canceled all sports until 2021. If Sept. 29 becomes unrealistic for Section 1, my guess is it will follow suit and fold the tent until Nov. 30.

According to several sources, Jan. 4 would then become the next target date should Nov. 30 be deemed unrealistic due to coronavirus spikes, school staffing issues and/or dastardly political influence.

If Nov. 30 becomes the new starting point for fall sports, we might as well stick a fork in it right now. How in the hell are we going to ask our student-athletes to freeze their butts off in late November and early December for an abbreviated campaign while wearing a mask? Makes zero sense.

A radical proposal to condense three seasons starting in January, with winter sports followed by fall and then spring by June graduations, is also on the table. Let’s face it, folks, a Sept. 21 start won’t give the schools adequate time to prepare as districts are still working on bringing back students to in-person learning, which is the primary goal. Superintendents are not likely to promote a scenario where students are not allowed in classrooms but can suit up for athletics. It’s not their M.O.

I suspect local superintendents will begin to look at the prospect of fall sports like a snow day – once one of them pulls the trigger on a cancellation, they will all follow suit #DominoEffect. Unfortunately, athletics are the low man on the totem pole, but please, someone high upon the stanchion needs to make a decision and live with it, so we’re not left to speculate week to week. This way, students can find other options, like employment, club sports, other hobbies, anything but sitting around wondering where the next party is or pondering why they’re so damn depressed.

Additionally, energy can then be channeled to moving fall sports to late winter/early spring, thus allowing coaches to use the fall as a preseason for workouts while safely adhering to guidelines. With condensed seasons, fall, winter and spring sports might have a puncher’s chance, which is what we’re praying for.

So, you see the stand-alone photo on this page of Mahopac junior D Sean Masset mashing an opposing player in the Indians’ 12-8 Sound Shore Lax Summer League championship win over Putnam Valley last Monday. This is the stuff we missed out on last spring, understandably, due to COVID-19 concerns, and we sure hope to see more of this in the spring of 2021 when Masset and his Indian teammates take aim at the Section 1 title, God willing.

But I fear for both football and lacrosse, should the two sports overlap in the spring due to the potential plan that could push football into the spring season. If Section 1 or NYSPHSAA prohibits players from playing two sports in the same season, it is going to dilute the pool of players if they are forced to choose between sports, and it’s going to kill small schools. The crossover among football and lacrosse athletes is as vast as it gets, and this could be a problem, especially among Class B, C and D schools, which rely heavily upon the multi-sport athletes. 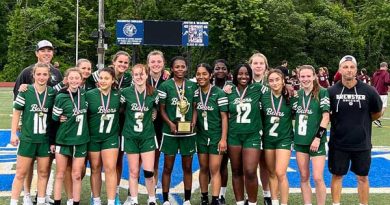 One Giant Leap for Womankind