Skip to content
The Northern Westchester Examiner
November 28, 2018 Rick Pezzullo 365 Views 1 min read
We are part of The Trust Project

Public hearings in front of the Cortlandt Town Board and Planning Board for environmental studies on two large projects planned in the Medical Oriented District (MOD) on Route 202 near New York Presbyterian/Hudson Valley Hospital are anticipated to be held in the first quarter of 2019.

The intent of the MOD is to encourage economic revitalization in the area surrounding the hospital and implement the goals and recommendations outlined in the town’s 2016 Sustainable Comprehensive Plan.

Cortlandt’s Comprehensive Plan, dubbed Envision Cortlandt, was the centerpiece of a business networking meeting, sponsored by M&T Bank, held last month at Cortlandt Colonial Restaurant where several prominent developers were in attendance to discuss various projects currently before the town.

Val and Armando Santucci of VS Construction Corp. were among those who appeared to discuss their Evergreen Manor project in the MOD, which involves the redevelopment of three vacant contiguous parcels totaling 28 acres with a 120-unit assisted living facility, 90-room hotel with 13,000 square feet of retail space, mixed-used retail/office building, 166 residential units and approximately 550 parking spaces.

Meanwhile, Kevin McAndrew of Cameron Engineering talked about another project in the same vicinity referred to as the Gyrodyne site, which calls for the redevelopment of eight contiguous parcels totaling 13.8 acres with 100,000 square feet of medical offices, 4,000 square feet of complementary retail, 200 residential units, 180 structured parking spaces and 383 at-grade parking spaces.

Last June, a public informational meeting on the establishment of MOD was held at Cortlandt Town Hall.

The Town Board has already adopted a Scope of Studies for the preparation of a Draft Environmental Impact Statement (DEIS) for the projects, according to Cortlandt Deputy Planning Director Chris Kehoe.

Kehoe stated VS Construction and representatives of the Gyrodyne parcel, where medical offices currently exist across from the hospital, are working on their portions of the DEIS, while town staff is preparing their required portion, including the new MOD zoning language.

It is expected that the DEIS by all parties will be completed by the end of this year.

During the development of the Envision Cortlandt Master Plan, numerous workshops, meetings and presentations took place to ensure community involvement. Part of the process included a lengthy survey that drew 725 responses, which town officials noted contained valuable feedback that was incorporated into the final document. 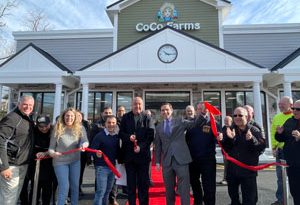