Government The Putnam Examiner
August 9, 2022August 9, 2022 Rick Pezzullo Kent
We are part of The Trust Project

A public hearing on a proposed amendment to the Kent Town Code extending a temporary land use moratorium prohibiting mining is scheduled to be held next week.

The proposed local law was introduced to the Kent Town Board Aug. 2 and will be the subject of a hearing on Thursday, Aug. 18 at 9 a.m. in Town Hall at 25 Sybil’s Crossing.

Town officials have been discussing the measure for the last two years in an attempt to gain more control over work proposed by developers. In the meantime, several six-month moratoriums on mining have been approved.

Currently, the New York State Department of Environmental Conservation is the only regulatory agency that can issue mining permits to developers – leaving the town with little control. In addition, mining isn’t a specific use, nor is it prohibited within the town code.

Mining has become a hot-button issue within the town since Kent Country Square LLC proposed building a truck stop on a 137-acre parcel east of the intersection of Ludingtonville Road on Route 52, and 1,500 feet away from Kent Elementary School and Kent Primary School.

Original plans called for a gas station, a rest stop, truck service and repair shop, two hotels (with a combined 254 rooms), an indoor waterpark, a restaurant and a convention center. The plan also would have resulted in the developer blasting 54 acres of rock and mining down 180 feet.

The truck stop element of the project has been withdrawn, but some residents still feel the developer intends to mine the site.

The developer is currently going through the State Environmental Quality Review Act (SEQRA) process and the application was last discussed by the Kent Planning Board in July.

‘We Want to Do This Right’: Kent Officials Extend Mining Moratorium a Third Time 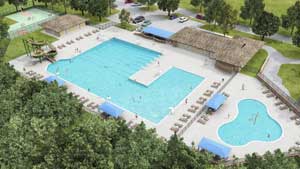