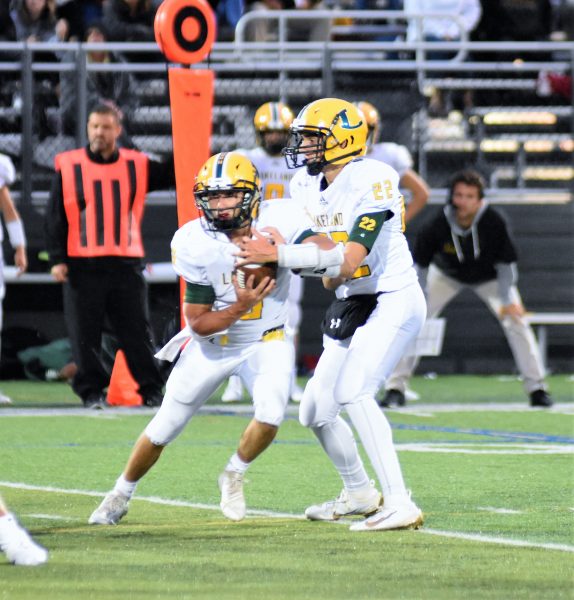 In a week of brutal local blowouts, perhaps LAKELAND’s 22-20 win over host Our Lady of Lourdes is start of business this week, seeing how it was one of just a few single-digits games in the region. After winning three in a row and improving to 3-1, the optimism surrounding the future of the Lakeland program is real at The Hive, given the fact that the junior varsity team is holding teams pointless in three of four games and allowed just one tuddy all season.

The varsity squad just went on the road and won at Lourdes, which is a shell of the Lourdes teams we’ve witnessed the last five seasons under veteran Coach Brian Walsh. Still, this is a game Lakeland likely loses in prior years, so when Hornet junior QB Tyler Santucci connects on 13 of 19 for 140 yards and two TDs, plus a 2-point conversion, Coach Mike Meadows knows he’s set under center. And when junior WR Rob Nardelli (4 catches, 62 yards, TD) and hard-nosed sophomore Nick Badillo (5 catches, 50 yards, 4 rushes for 16 yards) are making significant impacts, Meadows has some complimentary skill players in the offing.

So, when seniors RB  Matt Makar (13 rushes, 42 yards, TD) and WR Landon Ruggierri (3 catches, 18 yards, TD, 2-point conversion) get ready to pass the torch, the coaching staff is banking on serious Class A contention as early as 2020.

We’ve heard this before out of Lakeland and drank the Kool-Aid all too often. For much of the last 20 years, Lakeland simply hasn’t put a premium on football (through no fault of prior coaches or staff members), but Meadows, now in his third season, appears to have steered the program in the right direction. Let’s hope so. Week 5 vs. reigning champion John Jay, ranked No.9 in NYS, is clearly a long shot, but an opening round playoff win and a quarterfinal playoff appearance should be goals set in stone.

Now for the blowouts, starting in Class A.

SOMERS went off on host Tappan Zee, 35-8, with RBs T.J. Deagan and Jack Kaiser (124 yards rushing) each scored two touchdowns for state-ranked (No.20) Somers, which played without versatile RB/DB Charlie Balancia (injured) yet again but improved to 3-1. Somers QB Jackson Kossow rushed for 73 yards and hit on 7 of 14 passes for 164 yards and fired two TD passes, including one to Daniel Rios. The Somers defense was stout with LB Kaiser and DB Nate Rosenzweig each posting an interception. Rosenzweig has truly stepped his game up in the absence of all-purpose senior Charles Balancia.

YORKTOWN toyed with Horace Greeley during a 49-7 shelling of the visiting Quakers, who could do nothing against the state-ranked (No.7) Huskers (4-0) in all phases of the game.

Yorktown RB Dylan Smith continued what looks like a potential All-NYS season, rushing for 90 yards on six carries, including three touchdowns, his longest a 41-yard jaunt.

Husker QB Trey Johnson completed 3 of 5 passes out of 5 for 135 yards, including a 55-yard touchdown pass to TE Ben Robinson and a 58-yarder to Keith Boyer.

Special teams-wise Yorktown was led by Dan O’Brien (8 kick returns for 400 yards) and Dean Patierno (4 punt returns for 146 yards, including 2 touchdowns of 59 and 75 yards).

BREWSTER blew out winless visiting Poughkeepsie, 47-6, last Friday when the offense and defense scored at will against one of the poorest outfits in the section; this, among many. Brewster (3-1) RB Tommy Consolato got the offense going with two first-half scores while Paul Catalano and Jahq Williams each had a pick-6 in the second quarter.

Defending Section 1 Class A champion John Jay cruised past WALTER PANAS, 49-17, doing most of its damage in the first half. Undefeated (4-0), state-ranked (No.9) John Jay scored three touchdowns on special teams, meaning the Panthers have much to do on specials. Panas fell to 1-3 but took away some positives, including QB Mark Perez’s two TD passes to WR Robert Ennis (127 yards).

HEN HUD’s home opener on its spanking new field was put on hold due to technical issues, but the Sailors (2-2) went over to Lakeland as its first home venue of the season and produced a 27-0 win over visiting Beacon. Sailor QB Braden Ellis fired touchdown passes to Mike Tosi (48 yards) and Sergio Silvario (51 yards) and added a score on the ground. Hen Hud RB Ryan Travis found paydirt from 28 yards. The Sailors hope to christen their new stadium this Friday vs. winless Poughkeepsie, followed by Brewster in Week 6.

MAHOPAC and CARMEL each cruised to triumph, the Indians (2-2) ending a two-game losing streak and the Rams (3-1) winning their third in a row on homecoming day.

The Carmel Crazies were treated to quite a day when the Rams rushed for 286 yards and saw six different players score, including RB Andrew Bumgarner (2 TDs), RB James Cox (19 rushes for 159 yards) and QB Andrew Nunez (5-7, 74 yards, 2 TDs).

The Carmel defense allowed only just 38 yards passing and picked off two passes.

Mahopac RB Vin Bastone rushed five times for 44 yards and a TD while sophomore RB Matt Courtney added 41 yards on the ground. Indian RB Matt Piekutowski also found paydirt. The back half of the schedule after Suffern in Week 5 is brutal; with Arlington in Week 6 and Carmel in Week 7 a combined 6-2 through four weeks.

PUTNAM VALLEY held a 14-0 lead on host Pleasantville, but the 2018 Section 1 Class B runner-up Tigers (0-4) allowed 42 points bridging the second and third quarters, including five TD strikes from QB Mike LaCapria, four of which went to WR Jared Williams, whom the Tigers could not match up with.

No.1 YORKTOWN – Class A Huskers (4-0) have to face a pair unbeaten challengers, what with Nyack and Fox Lane the last two weeks. Nyack hasn’t beaten anybody worth its weight and Fox Lane has an RB in Michael Washington who could be a nightmare for the Huskers, but we just don’t see anything preventing a 6-0 regular season.

No.2 CARMEL – Class AA Rams (3-1) go on the road for a tough assignment with Arlington Friday (6 pm); this is pretty much a pick-’em game but we like the Rams’ chances. Rams hope to run the table to get Coach Todd Cayea his 150th career win at Mahopac in Week 7; couldn’t have been planned better if they tried since a massive portion of those wins have come against the rival Indians.

No.2A SOMERS – Class B Tuskers (3-1) are highly regarded as one of the top four Class A teams along with Yorktown, Rye and defending champ John Jay; oh, and by the way undefeated, unranked Clarkstown South is pretty legit despite flying under the radar. So, something’s gotta give regarding a Final 4 with five team in the mix. We’ll find out the truth about South this weekend as they hit up Rye.

No.4 MAHOPAC – Class AA Indians (2-2) have Suffern (2-2), Arlington (3-1) and rival Carmel (3-1) left, so if they finish up 2-5 the naysayers will be out in force. If they figure out a way to win two of the final three games, then this will be a truly inspiring regular season, but the Admirals and Rams are longshots.

No.4A BREWSTER – Class A Bears’ (3-1) have Beacon and Hen Hud left on the docket, which should, if they bring their A-game, enable the Bears to go 5-1 with a realistic chance to host a home playoff game at the Bears’ Den, which is a formidable 12th man come post season.

HM LAKELAND – Class A Hornets (3-1) went up to Lourdes, beat the refs, beat a legendary coach and bested the Warriors, who may be down this year, but still provide a quality test the Hornets haven’t been able to pass in recent years.