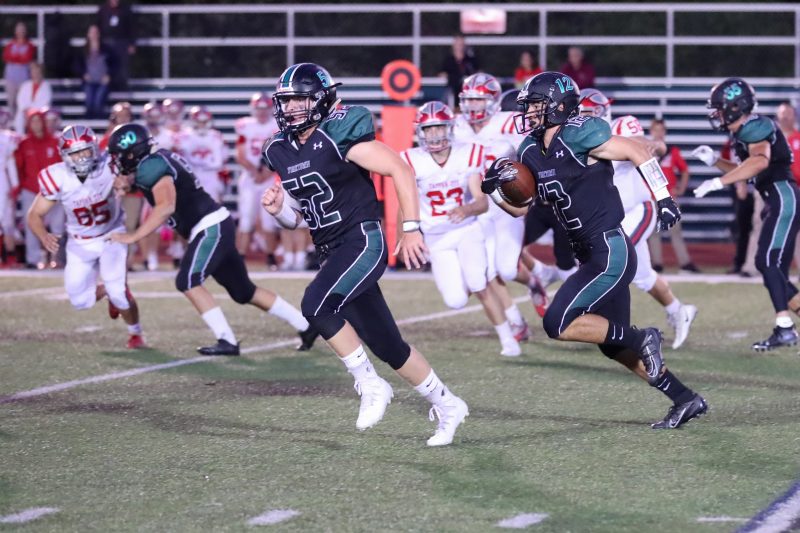 If it weren’t for state-ranked (No.3) New Rochelle in Class AA, we’d be hard-pressed to forecast Class AA, A and B this fall, but four-time defending champion New Ro’ makes AA an easy call this season, as it has for much of this century while winning 13 sectional titles since 2000.

The first installment of the NYS Sportswriters rankings came out last week and Section 1 is, as usual, is strongly represented in Class A and B. New Ro’ is the only Class AA program among those ranks, and unranked Somers (2-1) just threw a monkey wrench into the Class A rankings with its stunning 28-24 upset of No.5 Rye (2-1); this, on the heels of Coach Tony DeMatteo’s Tuskers’ 30-12 loss to No.9 Yorktown (3-0) the week before.

Somehow, defending Class A champion John Jay (3-0), currently ranked No.12 in NYS, is flying under the local radar with so much focus on Rye, Somers and Yorktown, but Coach Jimmy Clark’s Indians were feasting on bears last Friday in Brewster during their 34-14 victory, so Class A is a crapshoot right now with as many as four or five legit contenders.

Early on, Class B looks like its boiling down to two teams, including defending Section 1 champion Ardsley (3-0), ranked No.4 in NYS, and No.6 Byram Hills (3-0), who just happens to have one of the more inspirational young coaches in the region in Doug Carpenter, the former John Jay CR standout.

Be this as it may, someone is bound to throw us a curve ball, but New Rochelle looks like the clear Class AA favorites; four teams – Rye, Somers, Yorktown and John Jay — appear to be legit contenders in Class A; and both Ardsley and Byram Hills are the cream of the Class B crop… for now!

Just gonna throw this out there before we dip in to the weekly recap: There are a ton of really, really sub-par football programs in Section 1 this year, and the difference between the haves and the have-nots is profoundly evident as much as it is worrisome…

SOMERS is just impossible to figure right now. A week after Yorktown ran roughshod over DeMatteo’s Tuskers, the coach had the actual gall to predict that a win over Rye would be the greatest regular season upset of his 51-year career. And when Somers junior RB Jack Kaiser scored with 18.9 seconds remaining, an improbable 17-point comeback was complete upon DB Nate Rosenzweig’s game-sealing INT. Kaiser finished with 152 yards on the ground and three workmanlike scores. Rosenzweig, who stepped up for injured senior RB/DB Charlie Balancia, added 71 rushing yards and a TD.

“We had a great week of practice and we stayed mentally tough and fought,” Kaiser said.

That toughness and work ethic resulted in Coach DeMatteo literally dancing along the home bleachers like a school girl in a plaid skirt on the last day of school; this, after his immaculate prediction at the team dinner #TheLegendGrows.

“That was so great to see,” Kaiser said.

JOHN JAY’s tempo and speed were too much for BREWSTER in the Indians’ 34-14 defeat of the host Bears (2-1) last Friday when Indian QB Luke Mercer hit on 8 of 14 for 94 yards, including three touchdown passes to WR Max Miraglia. Mercer added 17 carries for 162 yards and yet another score as the Indians (3-0) built a 28-7 halftime lead. Jay RB Jack O’Reilly added 92 yards and a touchdown. DB Paul Catalano had a 55-yard pick-6 to get Brewster some hope before the half, but it wasn’t nearly enough against the defending Section 1 champs.

“They are the real deal, fast and furious,” Brewster Coach Ed Mulvihill exclaimed! “The QB made good decisions all night and defensively they swarmed to the ball. They are going to be a tough matchup for someone in playoffs.”

LAKELAND was hoping to be 3-0 at this point, but a Week 1 loss to Brewster foiled its plan, but here Coach Mike Meadows’ Hornets are at 2-1 as we enter Week 4 after a 42-20 win over host Beacon. Lakeland is above .500 in Week 3 for the first time in quite some time after QB Tyler Santucci hit on 10 of 15 passes with career highs on yards (245) and TD passes (5). Hornet WR Landon Ruggieri snatched two of those passes for scores and 126 receiving yards. WR Mike Castelli added six catches for 110 yards and three scores. Hornet RB Matt Makar moved the chains all night, with 28 carries for 134 yards and a touchdown.

PANAS Coach Paul Ronga, in his first season, earned his first win, a 28-6 win over host Poughkeepsie when QB Mark Perez fired three touchdown passes for the Panthers (1-2), giving him five for the year. Two of those TD strikes went to WR Robert Ennis. Panther RB Dean Ragone rushed for a score.

CLASS AA
CARMEL went off on visiting RCK Friday, 33-0, doing so behind a career performance from Ram QB Andrew Nunez who connected on 9 of 13 for 170 yards and two TD strikes to WR Alex Beauchesne, who had four catches for 100 yards. Nunez added a rushing TD. Carmel RB James Cox added 17 carries for 119 yards and a touchdown while RB Andrew Bumgardner also rushed for a score for the Rams (2-1).

State-ranked (No.4) Ardsley’s 21-7 win over PUTNAM VALLEY went as expected but the Tigers held a 7-0 lead when QB Ryan Singer put the host Tigers on the board. However, that was it for PV, who dropped to 0-3.

No.1 YORKTOWN – Class A Huskers (3-0) are gonna be 6-0 heading in to the playoffs – unless unbeaten Fox Lane is better than we think they are — and that record should/could provide a critical No.1 playoff seed in what has become a wide open Class A. In the 56-28 win over TZ, Husker RB Dylan Smith put up a gaudy 223 yards and three TDs on just 11 totes. WR/RB Keith Boyer had six carries, three of which found paydirt, for 66 yards in all. RB/QB/WR Sean Vogel rushed for 53 yards and a score. So many players is a real nice problem for Coach House.

No.2 CARMEL – Class AA Rams (2-1) will tune up this Friday vs. Ramapo before visiting Arlington in a Week 5 doozy that will have a major say regarding league bragging rights and the potential No.2/3 seed in the playoffs, which Carmel might secure if they bring their A-game from this point forward. Carmel has been a steady program the last 25 years, eh? Oh, that’s when Coach Todd Cayea showed up.

No.2A SOMERS – Class B Tuskers came out of this brutal stretch at 2-1, which is not bad considering perennial powers Yorktown and Rye were on the docket in Week 2/3, but the roll they get on now with TZ, Fox Lane and Nyack should result in a 5-1 regular season mark and a potential No.2/3 playoff seed depending on what Yorktown and John Jay do the rest of the way. Our best guess if both the Huskers and Indians win out and finish 6-0 based on their remaining schedules, but the Tuskers have been down this road before and managed a way to the finals.

No.4 BREWSTER – Class A Bears’ (2-1) had little chance against the speed and tempo of defending champion John Jay, but that should not deter them from the goal of reaching the quarterfinals.

No.4A MAHOPAC – Class AA Indians (1-2) have a legit shot at going 3-2 with host Mount Vernon and visiting Suffern up next, but road warriors Arlington in Week 6 and rival Carmel in Week 7 could spoil the party by setting Mahopac up for a really rough post-season play-in game. Remember, this season is primarily about building for the future and passing the torch.