The newly renovated theater at the Fox Lane Middle School was dedicated last week to Suzanne Grant, a former six-year Bedford Central School Board trustee and a passionate community volunteer who died prematurely in 2019. She was also the co-proprietor of PORCH Home + Gifts, a retail store in Mount Kisco.

Last Thursday night the second-floor theater at the middle school honored Grant with a ceremonial ribbon-cutting followed by live performances. At the ribbon-cutting was Grant’s husband, David Grant and his two children Dylan, 22, and Samantha, 25, both alumni of Fox Lane High School. Dylan is a graduate of Tufts and Samantha is a teacher in New York City.

David Grant said his wife was a supporter of the performing arts. “The School Board named the theater in honor of Suzanne’s passing,” he said. “This theater is the ‘front door of the school district,’ an important space for kids, teachers and the community.”

The 200-seat theater has been fully upgraded from a dated, brick-walled space with old risers to a formal auditorium replete with theater-style retractable seats on a motorized platform to allow for flexible floor space and seating, new acoustic-enhancing sound panels, a completely refurbished floor and a new grand piano.

About 100 people attended the dedication which was also broadcast on the district’s website. Grant, who is President of The Suzanne Grant Foundation, told the audience, “We wanted to remind everyone that walked into this space that Suzanne lived her life representing certain values — caring, inclusion, kindness, integrity, honesty and grace. It’s our hope that these values bounce off of these seats, ricochet off of these new walls and reflect off of these new floors and into the soul of everyone that walks into this room.”

Matt Vanacoro, Coordinator of the Performing Arts for the school district, took the role of MC and accompanied many of the performers on piano. The 21 performers played a variety of rock, jazz and classical music and were students, student alumni, current and former music teachers. Among the performers were the high school’s string quartet, elementary school music teacher and clarinetist Bryan Filetto playing jazz and a vocal trio with alumni Samantha Grant, Casey Crowell and Linsey Ruzza who sang the last song they performed in the district as students.

Bedford Central School Board President John Boucher thanked the audience for making the event happen. “One of the first families we met when we moved here was the Grant family. You couldn’t buy better neighbors.” Boucher shared his story of how Suzanne convinced him to run for the board of education. “Suzanne inspired me to give a little bit back.”

In his address, BCSD Superintendent Joel Adelberg said, “I just can’t tell you how touched I am to be here. I look around this room and see so many faces of so many community members who represent to me the heart, the soul, the passion, the potential and power of the Bedford Central School District. There would be nobody who would bring together this group more than Suzanne.”

Grant explained that the space was remodeled to be used by all ages. “This space is important to every kid taking part in science fairs, read-a-thons, art shows, concerts, guest speaker presentations, student meetings, enrichment seminars. Also, it’s great that students and teachers from five different elementary schools can use this theater.” 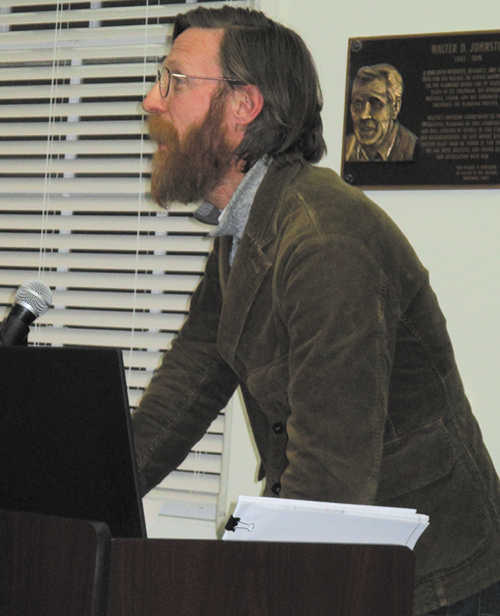