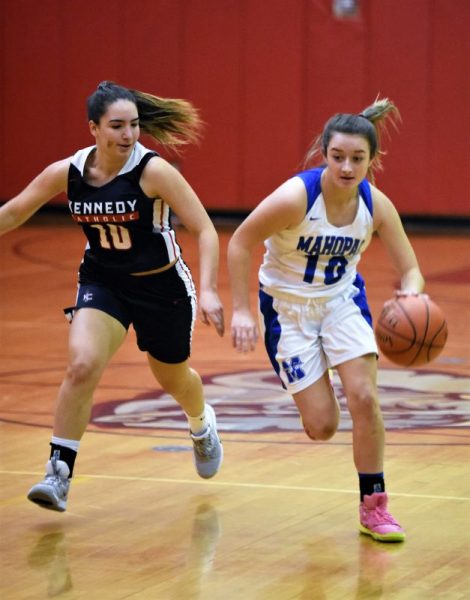 The 2020 season is shaping up nicely in the early stages for several of the local clubs.

WALTER PANAS is going through a prime period in its history, having reached the County Center in two of the last three seasons, and, seemingly, having more than enough to get back there in 2020 should the Panthers cash in their chips in late February.

Panas (3-1) won its holiday tournament in convincing fashion Saturday, taking out Peekskill, 75-25, behind 22 points and an MVP effort from G Cailean Nolan. Panther G Kristen Cinquina provided a solid second scoring option and went for 18 points and was named to the all-tournament team.

“Both of them were excellent last year, but both have added new dimensions to their games,” Panas Coach Matt Evangelista said. “They both worked very hard in the offseason to improve their strengths like shooting, but also added things like driving floaters and pull-up jumpers to make them even more dangerous offensively. Both have really committed to their defense as well; each is averaging four steals per game.”

In the opening round of the Panas tournament, Peekskill (1-4) beat Keio 42-36 when Cowan-Hongach dropped18 points, dished five assists and notched five steals. Overby had nine points.

Panas took care of business with a 51-29 win over Beacon when Cinquina (13 points) nailed three 3’s in the third quarter. Nolan finished with a game-high 15. Panas played suffocating defense throughout the tournament…

Down 17-2 in the opening round of the Somers tournament, KENNEDY Coach Len Yearwood kept the Gaels focused on the big picture; four quarters of basketball. After one of their worst quarters of the young season, Kennedy rode the efforts of Taylor Brenneman (24 points, 6 rebounds) and Erin Brann (16 points, 12 boards) to a 59-55 come-from-behind win over Section 1 Class AA MAHOPAC last Thursday.

“We just stayed focused on the things we knew we could control,” Yearwood said. “We knew we started with no energy. I just kept telling them to flip that switch and give yourselves a chance, and they did. They showed great heart!”

Kennedy did not sustain that momentum in the finals, losing to Horace Mann…

Mahopac (2-1) managed to bounce back in the consy round against SOMERS, defeating the Tuskers 51-46. Indian sophomore Melanie DeMeo (6 points) ran the point and was named to the All-Tourney team while F Caitlin O’Boyle (14 points), Kristina Rush (9 points) and Lauren Beberman (9), who drained a 3 with 6:39 to play and gave the Indians a 42-29 lead, balanced the score sheet.

Somers senior G Dani DiCintio made things very dicey when she hit from behind the arc, made a steal and converted the layup to bring the Tuskers (0-4) within a point (47-46) with under a minute left. DeMeo, Rush and Beberman combined to go 5 for 8 from the stripe down the stretch to seal the deal.

DiCintio, the lone holdover from the Somers team that reached the state Final 4 back in 2017, hit five bombs from distance and scored 11 points in the fourth, 25 overall, to make the All-Tournament team…

In Class C HALDANE’s 55-54 win over Class AA CARMEL in the opening round of Croton’s Mayclim Tournament, Blue Devil Bela Monteleone knocked down a career-high 28 points, collared seven rebounds and grabbed four steals to propel the Blue Devils (2-2) to the championship game. Olivia McDermott (nine points, five steals and two assists) and Molly Siegel (eight points and four rebounds) each stepped up. Daniella Bello put up 14 points while Caroline McIntyre added 12 points for the Rams (2-3), who erased an 11-point halftime deficit and were up by one heading into the fourth quarter.

Haldane could not keep the good time rolling in the finals of the Mayclim Tournament where the Blue Devils lost to the host Tigers, 69-32.

As she is on many nights, CROTON’s Anna Eng, the tourney MVP, was the best player on the court, going for a game-high 25 points. Tigers Erin Reynolds (14 points, All-Tourney) and Tamera Taylor-Moore (13 points) led a vastly improved Croton (5-1) club…

Marist-bound Caitlin Weimar led the Sailors with 28 points in HEN HUD’s 61-56 loss to Harrison, but the Sailors (4-1) will look to rebound this weekend when they host a doozy of a local tournament. Mahopac opens against Panas on Tuesday, Dec. 17th at 4:30 p.m. while the host Sailors take on Class C heavyweight Haldane (6:30 p.m.). The consy and finals will be played on the 18th at 4:30 and 6:30 p.m., respectively…

Apparently, Byram Hills is going to be a factor in Class A this season after its 62-55 win over LAKELAND. Hornet Hannah Devane scored 25 points, hauled in eight caroms and continues to be a solid contributor for Lakeland (2-3), which held a 28-22 lead at the half. Taylor Hormazabal added 12 points while S. Pinkowski went for eight…

YORKTOWN was impressive in several ways during its 54-18 win over host Roosevelt.

While Melissa Severino had 11 points and five rebounds for the Huskers (3-1), who opened with a 22-2 run, Alyssa Perrino added eight points and six rebounds. All 11 Huskers scored, including Alyssa Giannasca (7 points) and Lindsey Townes (6 points). Yorktown 30-5 at the half and showed some class.

“We were complimented by many people at Roosevelt on our good sportsmanship,” Husker boss Brian Mundy said. “That means a lot to me.”…

In the opening round of the BREWSTER Tournament the Bears defeated Nanuet, 60-57, behind a pair of dynamic double-doubles from Alexis Mark (13 points and 10 rebounds) and Grace Galgano (12 points, 13 rebounds and six blocks). Carly DeLanoy and Madison Dakin added 11 points apiece for the youthful Bears (5-0), who are well ahead of schedule.

In the finals, the dynamic duo of Mark and Galgano were back at it as the Bears trimmed Pelham, 33-28, to claim the championship. Mark, the tourney MVP, had another double-double (13 points and 12 rebounds) while Galgano was named all-tournament with nine points and 14 rebounds…

PUTNAM VALLEY is off to a hot start at 5-1, but getting over the hump is never easy. If it were, there wouldn’t be a saying about it. Getting over the hump requires grind, the kind of grind that isn’t in everyone. Reigning Class B NYS and Federation champion Irvington is more than just a hump for Section 1 basketball foes. The Bulldogs – winners of five NYS Federation titles and 18 Section 1 crowns — are the monkey on your back, the team you circle on the schedule, and every other cliché in sports… for good reason.

Putnam Valley was as close as it’s ever been to getting over that hump until Bulldog Grace Thybulle reminded everyone why Irvington is usually the team to beat in Class B.

On the game’s final possession, the Irvington center used her height, which is Putnam valley’s kryptonite, to seal a 47-45 win over the visiting Tigers. Thybulle denied a baseline drive with a clean steal, preventing PV’s last-ditch attempt at getting over the hump.

Putnam Valley G Kelli Venizia stroked four 3’s and scored 14 points to lead the Tigers, along with promising freshman Eva Dechent (14 points). Tiger Arriana Stockinger finished with 11. Putnam Valley shot poorly from the field (8 for 29) in the first half and played without the services of veteran Cyera Daughtry (head trauma); two keys they hope to improve upon should the Tigers and Bulldogs meet again.

The undermanned Tigers finished the game with nine 3-pointers, which kept them afloat.

In Putnam Valley’s 48-18 trouncing of Westlake, DeChent led all scorers with 20 while Venezia, who is inching close to 1,000 career points, added 13 for the Tigers.