Skip to content
The Northern Westchester Examiner
December 10, 2019 Rick Pezzullo
We are part of The Trust Project

“It is with a heart full of gratitude for the people of Ossining that I announce I will not seek a fourth term for mayor in 2020. After thoughtful consideration, I have decided that I will start a new chapter,” Gearity stated in a letter to residents. “During my time as mayor the village has become greener, stronger, better connected, more welcoming to all, and economically thriving.”

Gearity was a trustee for one term prior to defeating William Hanauer for mayor in 2014. She ran unopposed in 2016 and in 2018 she fended off a spirited challenge from Trustee Omar Herrera.

“When I took office, my sons were in pre-k. Today they are in middle school, and college is right around the corner. I will be exploring opportunities for a job that contributes financially in a significant way for my family,” Gearity stated. “Though it will be difficult to find another position as rewarding and meaningful as mayor, it is time for me to start thinking about what is next.”

“Serving in local elected office is personally and professionally fulfilling, and perhaps I will again some day,” she continued. “For now, I am excited to work with a new village board, dedicated staff, and our highly engaged community for a productive 2020.”

In the final year of her third term as mayor, Gearity said she will continue to be progressive on the environment, housing and social justice policies; conservative on taxes; and transformative on how village officials communicate with residents.

“My commitment to make everyone feel welcome in our community, led to Ossining’s first raising of the LGBTQ rainbow flag for pride at Village Hall, as well as becoming the first community in New York to pass a gender-neutral bathroom signage policy,” Gearity stated. “As an advocate for our undocumented residents, I championed the campaign to allow all drivers to be eligible to be licensed in New York State.”

“Holding the line on taxes is one of the most significant ways that we can keep Ossining relatively affordable,” she continued. “During the budget negotiations my first year as mayor, I introduced the idea of a 0% tax rate increase. The suggestion was unheard of at the time. We weren’t yet in a fiscal position to keep it totally flat, though we came close. That mindset put us on the right path. This week we will vote to have a 0% tax rate increase for the fourth year in a row.”

Herrera, whose trustee term ends this year, said he currently had no intentions to run for mayor next year.

“In the new year, I plan on continuing to be an active community organizer and advocate at the local, county and state levels as well as focus on personal matters and exciting new ventures,” he said. 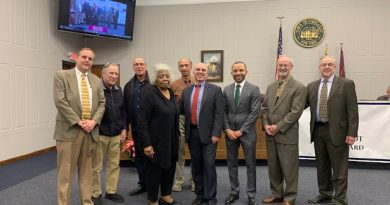 School Budgets, Board of Education Races Set for May 21 Votes