Skip to content
The Examiner
November 29, 2018 Martin Wilbur Chappaqua, New Castle
We are part of The Trust Project

For parents, there are always challenges to face and obstacles to overcome. That may be particularly true for mothers.

It’s no different for television writer Margaret Ables and actress and author Amy Wilson. But they do their best to try and laugh off the frustrations instead of becoming unraveled by them.

This Saturday night at 8 p.m. the pair will team up once again at the Chappaqua Performing Arts Center to present “What Fresh Hell: Laughing in the Face of Motherhood,” reprising their live show last year in Chappaqua.

It is a different version of Ables’ and Wilson’s weekly podcast that they’ve been doing for the past two years and is closing in on its one millionth download.

“The idea that every day you open the door and what is it going to be?” said Ables, a Pleasantville resident with three children who are 6, 8 and 10 years old. “Is it going to be the glitter on the rug, the Sharpie, is it the day that the teenager decides that this is the day he hates you? Life is fresh hell. But we just try to explore it in a way that’s all comedy because basically, you’ve got to laugh.”

Actually, for the past 25 years Ables and Wilson have had plenty to smile – and laugh – about in between juggling the pressures of their home and professional lives. Ables, who started performing standup and improv comedy in college, has spent much of her career as a writer for PBS Kids and MTV and as senior writer for Nickelodeon’s Nick Mom.

Wilson, who lives in Manhattan and also has three children – a high school sophomore and a 14- and an 11-year-old – has a long list of television and stage credits, including playing the roles of Molly Carver on the ABC sitcom “Norm” and Barb Krolak on NBC’s “Daddio,” along with an assortment of guest appearances on network shows.

In college, Wilson said she was friends with Ables’ sister and then found herself doing comedy shows with Ables. Both women would get married, have three children and had been blogging about parenting.

“About three years ago, Margaret came to me and said ‘I think we should try doing a podcast here,’” Wilson recalled. “It took us probably six months to get our act together and get ready to do it.”

Now more than 80 episodes later, the podcast, which uses the same ‘What Fresh Hell’ title, has attracted a spiraling number of listeners. The title is an expression Ables’ mother used when Murphy’s Law would invariably take over.

However, Wilson said Saturday’s show won’t be a live version of one of their 45-minute podcasts. Instead it will be tailored to their audience so they can connect with the people who attend, she said.

“There’s just no warmer audience than groups of women who are out with their friends,” Wilson said. “They have a babysitter, they are out and it’s just for them.”

Ables said of the more than 400 people who bought tickets last year about 20 of them were men, including their husbands. One segment featured a quiz between their husbands about their own children. To highlight the differences between moms and dads, the score was 0-0 and extra rounds were needed to break the stalemate.

The initial show came about after fellow Pleasantville resident and Soup’s On Entertainment head Scott Campbell suggested the idea to Ables.

This year will feature fresh material with their unique take on life and parenting.

“We’ve fallen into the trap that this is a puzzle to be solved and that if you solve everything right and get them into Harvard, that’s what a happy parent is,” Ables said. “When I look around that’s not what I see. I see a lot of happy parents that are just enjoying their kids and it’s not about whether that kid speaks Mandarin Chinese or goes to the top camp or gets the top grade on the SAT.”

Ables and Wilson hope the local live show won’t be just an annual performance. They have been receiving increasing requests to travel around the U.S., including Austin, Texas, where they will perform next year.

For more information, tickets and to listen to the duo’s podcasts, visit www.whatfreshhellpodcast.com. Tickets, which start at $20 each, can also be purchased at www.chappaquapac.org. 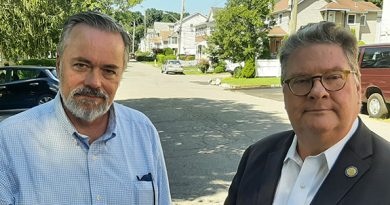 Pleasantville Gets $200K Grant From Harckham for Flooding