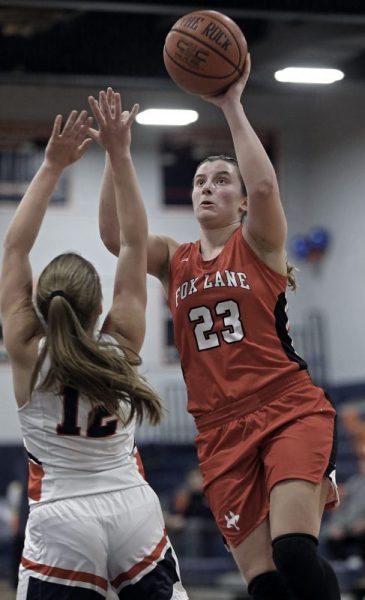 No, there weren’t actually any punches thrown, but to Fox Lane girls’ basketball coach Kris Matts last Tuesday afternoon’s game at Horace Greeley High School was a bit like a boxing match.

The slugfest wound up going to overtime, where the Foxes eventually prevailed 52-46 in a contest they trailed by seven points at halftime and by two entering the fourth quarter. Natalie Pence finished with a game-high 21 points, including nine in the third quarter when Fox Lane bounced back from its first-half woes.

“Oh, this is huge,” said Matts after his team had found a way to defeat the Quakers. “The playoffs is where, if you haven’t had a game like this before, then you’re done. And then the season’s over. This is our second overtime win. So now this team is battle-hardened. I have confidence in them that in a situation like this they can come out on top.”

The Foxes probably got more than they bargained for from a Greeley team that endured a 10-game losing streak earlier in the season and wound up with just four victories. An 8-0 run to close the first half, highlighted by a 3-pointer from Emma Rose and a 15-foot jumper by Helen Matthews, gave the Quakers a 21-14 advantage at intermission.

“The message at halftime,” said Matts, “was basically that we were getting a lot of open looks on offense and we weren’t making any of them. And I thought it was because we were hesitant. After the second quarter, I said we’re gonna have to change something if you guys don’t start hitting shots. And, defensively, we really picked it up.”

Indeed the second half began with a seemingly different Fox Lane team on the floor. Pence connected on a pair of runners in the first 35 seconds and the Foxes went on an 11-0 burst. A 3-pointer by Pence with 6:21 left in the quarter gave Fox Lane its first lead since her trey midway through the second period had provided a 14-13 edge.

“Yeah, of course it’s disappointing,” said Greeley coach Sarah Schum about the way her team was ambushed early in the second half. “You want to come out and add to your lead. But basketball’s a game of runs. So I didn’t think they were just gonna lay down and roll over. I knew a run was coming at some point. I think our team was great in the sense that they responded quickly and then went on a little run ourselves. They didn’t just fold.”

Led by the scoring of Kaylin Genda, who had all seven of her points in the third quarter, and Matthews, who finished with a team-high 12, Greeley outscored the Foxes 13-7 over the final four and a half minutes, taking a 36-34 lead on a pair of free throws by Genda in the final second.

A basket by Matthews with 3:23 remaining in the game gave Greeley a 42-38 edge. Unfortunately for the Quakers, though, they never scored another point in regulation time while the Foxes got a runner in the lane from Pence with 2:38 to go and then a game-tying layup by Susannah Kimsal with 30 seconds on the clock.

In the four-minute overtime session, Fox Lane’s Sophia Garten scored on a put-back a minute in, then Kat Genda tied the game again with a lefty layup 90 seconds later. That set the stage for perhaps the biggest shot of the night, a top-of-the-key 3-pointer by the Foxes’ Holly Ades with just over a minute remaining.

Greeley managed to close within 47-46 with two foul shots by Rose with 48.8 seconds to go, but a basket by Pence with 34 seconds left and then a free throw by sophomore Quoya Schnell with 12.3 seconds on the clock all but clinched the Fox Lane victory. Pence provided the final margin with two more free throws with 5.8 seconds remaining.

“It’s heartbreaking,” said Schum, knowing that the sectional playoffs are about to get underway without her Quakers. “I think we needed (to win) today. Maybe even Thursday (against White Plains). But I’m telling you, these kids are still gonna come to fight. It doesn’t matter. They could’ve been out of the playoffs in game eight if that’s possible and they would still fight every single day.”

“I’m a Fox Lane graduate and I hated coming here,” said Matts, who warned his players they were in for quite a battle before they took the court. “I said Fox Lane and Greeley is always a war. It’s always a playoff atmosphere in here when it’s Fox Lane-Greeley.”