It was no accident that the stone walking path in the space between the Mount Kisco Public Library and Village Hall became a fashion runway early last Friday evening.

That was where more than 50 Fox Lane High School students from the school’s Fashion Design Program were able to show their peers, parents and community their creativity and talent that had been honed in class, for some of them as long as the past three years.

Some 70 garments were created by the students for the show. Many of them found volunteers at the school to model their creations while some strutted along the public square-turned-runway themselves.

“They learn how to use patterns, they learn how to create patterns and right from the get-go we were about individual expression,” Fox Lane art teacher Lindsay Lappin-Burke said of the program in which she teaches all three levels of classes. “So it’s not about creating cookie-cutters or anything; it’s really like what is your aesthetic, how can you express that.”

The picture-perfect weather for the occasion and the music that was piped in as the models circled the walk produced a special atmosphere for students and onlookers.

The idea for the show was planned by three senior high school interns, Olivia Lippolis, Bianca Giuliano-Thomas and James Antash, who were all part of the program and wanted to showcase what they and their classmates have accomplished in school.

“I did the fashion classes and that was the best part of my school career. It was the best thing,” Lippolis said. “I loved the people, I loved the teacher and it’s like a really supportive community, so not only did I learn to do fashion and technical skills, it kind of gives you a better sense of the world itself.”

Not only did Lippolis, Guiliano-Thomas and Antash organize the fashion show, but they took an empty storefront off of Main Street in Mount Kisco and turned it into an art gallery this spring, Lappin-Burke said. During the last five weeks of the school year, there were four different types of art exhibits, each with its own public reception.

Mount Kisco Arts Council Chair Lisa Abzun said the council and the village encouraged the fashion show as a way to bring different parts of the community together that might not typically interact.

The Fashion Design Program was launched in the 2019-20 academic year after the Gerbino family of Mount Kisco made a donation to jumpstart the program, Lappin-Burke said. Their son had graduated a year before its launch and he was headed to the Fashion Institute of Technology. While the music and sports programs have their supporters, the family figured there must be other students like their son who would benefit, she said.

Their belief turned out to be correct, but there was no faculty at Fox Lane equipped to lead the program. Lappin-Burke said she drew “the short straw” to oversee the program and immersed herself in getting up to speed, including teaching herself how to sew.

“I really learned along with the kids, so it’s been a tremendous learning experience for me to refresh my career,” said Lappin-Burke who has taught at Fox Lane for 14 years.

Best of all, the passion of the students helped them take the initiative to help create the foundation for the program, she said.

For Giuliano-Thomas, who was part of the art program for the past three years and who will be headed to Pratt Institute in the fall, it helped her narrow what she hopes to do. 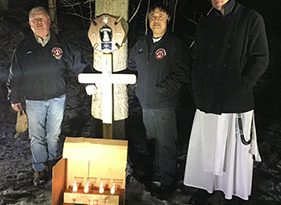