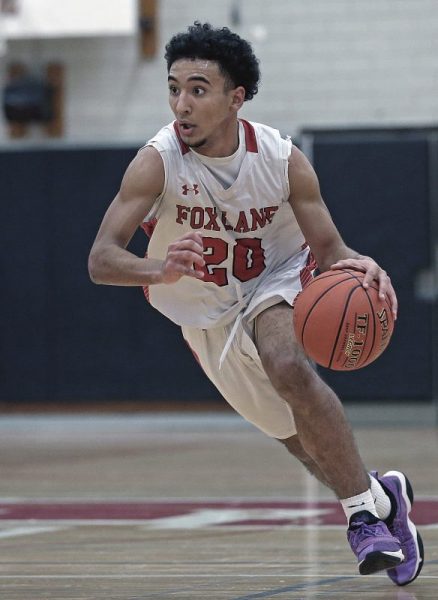 Fox Lane’s Pedro Silva drives to the basket in Saturday’s
title game of the Tip-Off Tournament.

It wasn’t the first time and likely won’t be the last that Fox Lane head coach Mike Tomassi banished his entire starting five to the bench the way he did a couple of minutes into the third quarter on Saturday evening.

Call it bold or call it rash, but for a few brief moments Tomassi’s decision paid immediate dividends. His second-unit Foxes went on a 12-2 tear to grab a one-point lead and fire up the spirited student section that hadn’t had much to cheer earlier in the night.

Unfortunately for the Foxes, the visiting Alexander Hamilton Red Raiders soon recovered from the unexpected tenacity of Tomassi’s reinforcements and regained control of the contest. Led by the inside play of Jourdan Belcher, who finished with 23 points and 15 rebounds to earn MVP honors, the Red Raiders escaped with a 54-46 victory in the championship game of Fox Lane’s second annual Booster Club Tip-Off Tournament.

“Yeah, I did that a couple times last year,” said Tomassi about his mass substitution early in the second half. “You know, we’ve got a talented group of kids, 15 guys, and I’ve got to be fair to everybody. It’s not easy subbing, but if you’re not gonna play hard and you’re not gonna compete for the team I’ve got to give other guys opportunities. And I thought tonight they deserved the opportunity.”

The Foxes never had the lead in the first half and fell behind by seven points on two occasions. But they only trailed 29-25 at halftime despite the bigger Red Raiders’ dominance on the glass. When the third quarter began with two buckets and five quick points from Hamilton’s Brandon Harris that stretched the Fox Lane deficit to nine points, Tomassi had seen enough.

He summoned five new players into the game and, just moments later, began reaping the rewards of his decision. Franz Depra ignited the big 12-2 burst by connecting on a 3-pointer from the top of the key. Pedro Silva followed with a steal and fast-break basket and then freshman Charlie Shevick chipped in with a toss in the lane on a second-chance opportunity for the Foxes.

A put-back basket by Hamilton’s Belcher momentarily slowed the Foxes’ surge, but Shevick soon answered with a runner in the lane. When another second-chance opportunity led to a 3-pointer from right of the key by Chris Bodine, the Foxes suddenly had a 37-36 lead with 2:35 remaining in the third quarter.

“It was great,” said Tomassi about the spark provided by his bench. “Those guys came in, worked hard. You know we always preach that your minutes are earned in practice. Those guys got an opportunity today and they definitely earned some more minutes.”

But the magic from the Foxes’ second unit didn’t last. After the 3-pointer by Bodine, Fox Lane went scoreless the rest of the third quarter. Two more baskets from the burly Belcher gave Hamilton a 40-37 edge heading to the final quarter and the Foxes never caught up again.

Bodine, named to the all-tournament team, supplied three straight Fox Lane baskets in the fourth quarter. His final one, with just under five minutes remaining, cut the Hamilton lead to 45-43. With 3:19 left, Aidan Hicks drilled a 3-pointer out of the right corner just before the shot clock was about to expire, moving the Foxes to within 49-46. The Foxes, though, then went through another scoring drought and the last five points of the night all came from the Red Raiders at the foul line.

“We didn’t win, but it paid off,” said Tomassi about his decision to turn to five new players when the Foxes were struggling. “Talent will take you only so far. If you’re not gonna compete and play together as a team, defend and work for the best shot possible versus a very good team, it’s gonna be tough. And I thought the group that came in in the second half, at least energy-wise, met them and gave us a chance to compete.”

The Foxes, now 3-2 this season, had advanced to the tourney final with a 63-45 victory over Peekskill in the opening round, led by Will Crerend’s game-high 24 points, 17 of them coming in a spectacular first-quarter performance. But their inability to follow it with a win over the Red Raiders left Tomassi searching for answers.

“Unfortunately, if you don’t take away other teams’ strengths or make them adjust, you’re not gonna win,” he said. “Our game plan going in was limit them in transition and limit their second-chance points. And I thought we didn’t do that very well. Losses are tough, but they do make you better in the long run.”