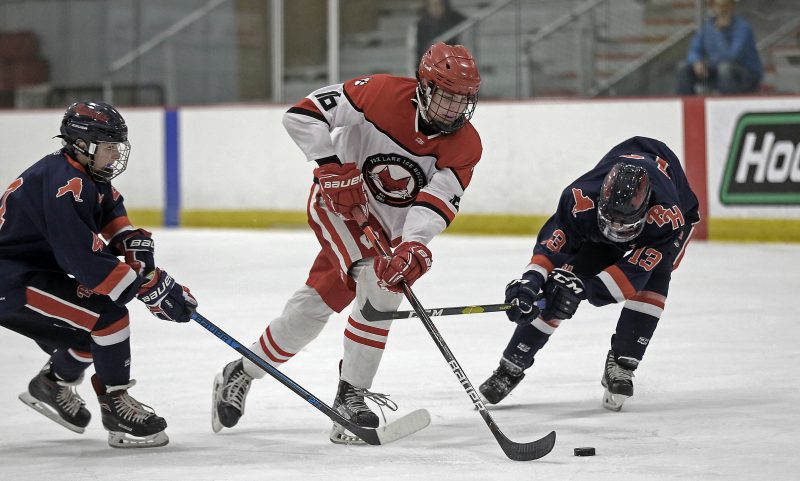 A barrage of goals from the Fox Lane hockey team early in the third period proved to be the difference on Sunday evening. Three in rapid succession broke open a game that had been tied after two periods and carried the host Foxes to a 6-2 victory over Byram Hills at the Brewster Ice Arena.

The Foxes, winners now of three straight games, got a goal each from half a dozen different players as they overcame a 1-0 deficit. Daniel Leader’s tip-in goal from just left of the crease on the rebound of a shot from the right slot just over 90 seconds into the final period gave Fox Lane a 2-1 edge and set the stage for two more goals that quickly followed and all but sealed the outcome.

“We kind of went into the locker room after the second period feeling like we had pretty good control of the game,” said Fox Lane coach Dan Mulvey, whose team outshot the Bobcats by a whopping 11-3 margin in the second stanza. “The scoreboard wasn’t reflecting it. We knew we were gonna continue getting our chances and hopefully things were gonna turn around. And fortunately they did.”

For Byram Hills coach AJ Cloherty, the Bobcats’ struggle in the third period was nothing new and kept them winless after three games this season.

After a scoreless first period in which the Foxes outshot Byram 8-4, it was the Bobcats who got on the board first as Austin Carlin, at the end of a two-on-one break, received a drop pass and sent the puck past Fox goalie Max Rauch just 66 seconds into the second. The Foxes soon managed to kill off a pair of Byram Hills power plays and tied the game on Michael Gallary’s blast from right of the goal with 4:39 left in the period.

“Our players have been doing this pretty much all season,” said the Foxes’ Mulvey after watching them deny the Bobcats despite being shorthanded for three straight minutes. “In a tough spot, we’ve been able to step up time after time. The key is to not put ourselves in bad situations. But we’re really proud of the guys. When they’re faced with some adversity, they’ve been able to rise to the occasion.”

Bobcat goalie Ben Sfarra, who wound up making 29 saves, was under constant siege late in the second period and the Foxes, despite being down a man, nearly grabbed the lead just before it ended when Leader skated up the left wing and sent a cross-ice pass to the waiting Adam Maiorano, who couldn’t quite get enough of the puck on a one-timer at the right doorstep.

But Fox Lane’s two periods of frustration were about to end. When play resumed in the third, the Foxes quickly grabbed the lead and then immediately extended it. Leader’s go-ahead goal was followed by another from Jake Wollman, whose shot from the left point came on a counter rush after the Bobcats’ Jesse Rosenberg had made a coast-to-coast foray up the ice the other way.

Wollman’s goal was followed just 58 seconds later by one from eighth-grader Henry Della Penna. Suddenly, not even four minutes into the third period, the Foxes had built a 4-1 cushion. Less than 50 seconds later, the Bobcats’ Lucca Conigliaro beat Rauch with a shot from straightaway, but Fox Lane quickly answered with two more goals just 18 seconds apart. Maiorano had the first one, stuffing home a rebound on a second try, and Henry Wallace provided the last one of the night from just right of the crease with 7:55 left in the game.

“It’s still early in the season, so we’re confident that we can get things straightened out,” said the Bobcats’ Cloherty, anxiously awaiting the return to the ice of sidelined defensemen Joe Cipriano and Owen Fleischer. “It’s just finding a way to get over giving up a goal and coming on stronger in the third. Those are two things that we’re not good at, admittedly. And those are two things we should be able to control.”

Meanwhile, the Foxes, now 3-2, don’t play again for nearly three weeks. The victory over the Bobcats, according to Mulvey, will make the long break a lot more tolerable.

“To walk out of here tonight with a loss would’ve been tough,” he said. “We’d have been sitting on that for a long time. So it’s gonna feel a lot better going into the holiday break with a winning record.”