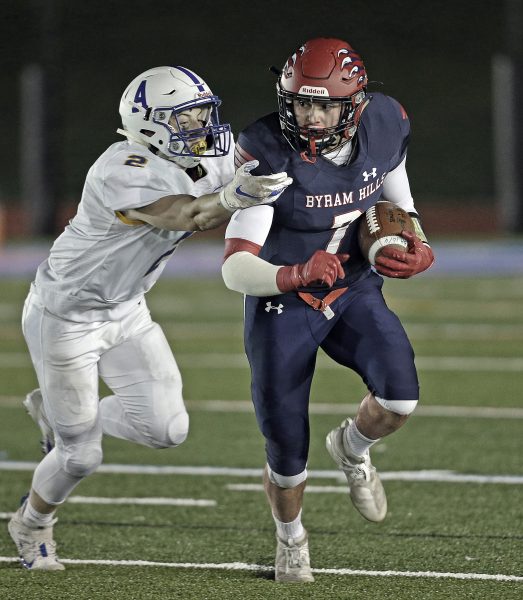 The fourth quarter of Friday night’s huge showdown against Ardsley may seem like one the Byram Hills Bobcats would soon like to forget, but head coach Doug Carpenter probably won’t let them.

A 10-point advantage quickly dissolved into a crushing defeat as a rapid sequence of misfortune led to 17 unanswered points for the visiting Panthers, who emerged from the battle between Class B unbeatens with a 24-17 victory. The Bobcats’ early two-touchdown lead turned out to be just as temporary as the portable field lights recently shuttled onto campus for Homecoming.

“I’m hoping that months from now, we can look back on this day and say, ‘Wow, what a great learning experience that was. We needed that,’” said Carpenter shortly after his team had lost for the first time in five games this season. “I think our kids will be reflective about this and we’ll get better.”

Facing an Ardsley team averaging nearly 35 points a game beginning the evening, the Bobcats quickly demonstrated they were up to the challenge by forcing a three-and-out on the Panthers’ first possession. They then thrilled the home crowd by marching 63 yards in eight plays, scoring a touchdown exactly five minutes into the game on Nic Picca’s seven-yard pass to Steven Franco.

Just four plays into the second quarter, Jack Tillinger ran three yards for another Bobcat touchdown. David Gold followed with his second point-after kick of the contest, increasing the Byram Hills lead to 14-0.

“Our kids were just excited to prove that we belong in that championship conversation,” said Carpenter. “I felt like we had a really good game plan and our kids practiced it really well throughout the week.”

The Panthers, held without a first down in the opening quarter, finally started to move the ball after Tillinger’s short TD run had capped Byram’s 14-play, 60-yard drive. Ardsley’s star running back, Jalen Leonard-Osbourne, scooted to his right on fourth-and-three from the 4-yard line, barely crossing the goal line to get the Panthers on the scoreboard with 8:25 left in the half. The PAT from Darren Judge cut the Bobcats’ edge to 14-7.

Ardsley threatened again late in the second quarter, advancing the ball to the Bobcat 33-yard line in the final minute. But the drive ended when Franco picked off quarterback Luke Mantini’s pass over the middle, and Byram Hills took a seven-point lead into intermission.

In possession of the ball to start the second half, the Bobcats picked up first downs on their first two plays and eventually reached the Ardsley 3-yard line. But an apparent Tillinger touchdown run was nullified by a holding penalty, forcing the Bobcats to finally settle for a 25-yard field goal by Gold that gave them a 17-7 cushion with 5:31 remaining in the third quarter.

“Yeah, that was frustrating,” said Carpenter about adding just three points instead of six. “Whether it was a legitimate holding penalty, I don’t know or care at this point. Certainly a touchdown would’ve been nicer in that spot. But I was proud of our kicking group that we were able to get out there and get the three points.”

The Bobcat defense again rose to the occasion late in the third quarter after Ardsley had driven inside the Byram 10-yard line. Leonard-Osbourne was denied the end zone on three straight runs and then on fourth down, Mantini, scrambling to his left and then all the way back across the field, misfired on a pass to Preston Wachtell.

The fourth quarter began with Byram still maintaining its 10-point advantage. But all the momentum would soon shift to the Panthers, starting with a botched Bobcat punt attempt on the third play of the period. Ardsley gained possession at the Byram 9-yard line and needed just one play to get back on the board with a Samuel Lowson TD run. Not even 90 seconds into the quarter, the Bobcats’ lead was trimmed to just three points.

“You know, that’s a thousand percent my fault because it’s something we practice,” said Carpenter about the Bobcats’ ill-fated punt. “Our punter came out because he needed a blow and we had our back-up guy in there. And I’ve never given him that rep in practice. I don’t think I’ll ever make that mistake again as a coach for the rest of my career. So I told him immediately after that was on me because I never gave him that rep in practice.”

But the Bobcats’ troubles were just getting started. On their ensuing possession, Picca’s pass was intercepted by Leonard-Osbourne, giving Ardsley the ball at the Byram Hills 30. Three plays later, Leonard-Osbourne tossed a surprise option pass to a leaping Wachtell in the end zone for a 23-yard touchdown that finally gave Ardsley the lead.

The Bobcats then proceeded to turn the ball over again with a fumble on the first play of their next possession. Ardsley wound up with a 29-yard field goal by Judge to build its lead to 24-17 with 5:37 left on the clock.

With just under three minutes to go, Byram got the ball back one last time, just shy of midfield. But on fourth-and seven, Picca was thrown down for a loss by George Lebberes, all but ending the Bobcats’ chances.

“I told them afterwards that they shouldn’t hang their heads for anything,” said Carpenter. “I thought Ardsley played their butts off. I thought our kids played their butts off. When you turn the ball over, especially in your own territory, it’s hard to win football games. Those are things I think we can clean up. And all our goals, all the cards, are still on the table.”