Skip to content
Generic SPORTS
March 6, 2020 Andy Jacobs
We are part of The Trust Project

A 10-0 spurt to start the fourth quarter by the host Harrison Huskies turned out to be decisive in last Wednesday afternoon’s Section 1, Class A quarterfinal game against Byram Hills.

The Bobcats’ five-point lead after three quarters quickly turned into a five-point deficit that they were unable to overcome. Fourth-seeded Harrison emerged with a 54-50 victory over its fifth-seeded league rivals and earned a berth in this Thursday night’s semifinals at the Westchester County Center.

“I think we hurt ourselves on our fast break,” said Bobcats head coach Tara Ryan after the Bobcats’ season ended one win shy of a trip to White Plains. “We had three or four consecutive turnovers and it allowed Harrison to get the ball, come back and have scoring opportunities. So it goes from a potential eight-plus lead to now it’s even.”

Byram Hills, which was led by Beth Corelli’s 15 points and 10 apiece from Olivia Picca and Stefana Latella, went scoreless over the first four and a half minutes of the final quarter as a 42-37 lead became a 47-42 deficit. A 3-pointer by Picca cut the Harrison lead to two points before Ashley Stagg answered with another 3-ball at the other end to give the Huskies a 50-45 advantage with 3:15 remaining.

After back-to-back steals by Corelli and Picca helped the Bobcats move within 52-50 with 36.8 seconds left, it was Stagg who all but sealed the outcome by making a pair of free throws after being intentionally fouled with 10 seconds on the clock.

“We’re so well matched up,” said Ryan about her Bobcats and the Huskies, who split their two games in the regular season. “You know, you play basketball and it was in their favor tonight. I think that’s the advantage of being the four seed and playing at home.”

After falling behind by five points in the game’s early minutes, Byram Hills rebounded to trail only 12-10 at the end of the opening quarter. The score was tied three different times over the first four minutes of the second period before a layup by Latella, on a dish from Corelli, gave the Bobcats a 20-18 lead that they never surrendered until the start of the final quarter.

Leading 27-25 at halftime, the Bobcats opened up the second half with baskets from Latella and Corelli. When Sophia Villani connected on a 3-pointer from the left corner, Byram built its largest edge of the day, 37-30, with just over five minutes left in the third quarter. In the final minute of the period, eighth-grader Grace Corelli made a steal and tossed the ball to her big sister for a lefty layup that enabled the Bobcats to take their five-point lead heading to the fourth quarter.

The final quarter started scoreless for nearly two minutes before the Huskies’ Tori Fernandez canned a left-corner 3-pointer. After two free throws from Stagg tied the game for the final time, Gabby Marraccini gave Harrison the lead for good by banking in a 3-point shot from the left elbow. The 10-0 spurt was capped by Victoria Lendino’s driving layup with 3:50 remaining.

Trailing by five points with just over a minute on the clock, the Bobcats made a late comeback bid as Beth Corelli stole the ball and went coast to coast for a layup. Another turnover caused by the Byram full-court pressure led to a Jen Mui free throw with 56.8 seconds left. With the Bobcats behind 52-50, Picca made another steal with 33.6 seconds to go.

Byram Hills came out of a timeout with a play designed to tie the score. But Picca’s backdoor pass to the cutting Beth Corelli with 22 seconds left wound up out of bounds and soon Stagg was standing on the free-throw line delivering the two foul shots that put the Bobcats away.

“I’m glad we were able to keep ourselves together,” said Ryan. “What’s great about our team is we really don’t quit. We know what we need to do to get back in the game and execute certain things. I’m glad we were able to do it tonight. A minute 24 left and down I think five or six or whatever it was, and what do you know we get two steals.”

The Bobcats, who were 15-5 in the regular season before beating the John Jay Indians in the opening round of sectionals, had defeated the Huskies by nine points at home in January and lost by nine to them on the road in early February. So having to play at Harrison likely cost them a chance to face top-seeded Rye at the County Center this week.

“You know, it didn’t work out for us tonight,” said Ryan. “We were just very proud of not giving up. That’s the strength of our team, that we’re so gritty. You know, a big two steals and layups at the end, which really made it exciting tonight.” 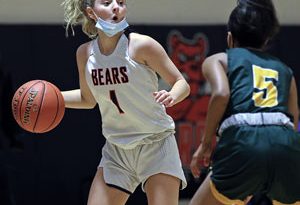 Briarcliff Girls Lose to Hastings in the Booster Club Tourney

Fox Lane Defeats the Bobcats With a Third-Period Eruption