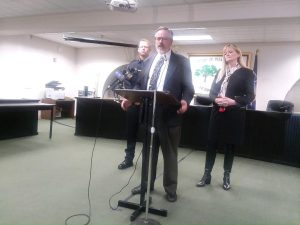 Village police discovered the bodies of two adults and two children apparently from the same family at a Pleasantville home on Thursday afternoon.

Police would not confirm whether the adults were the parents of the children, nor would they confirm the ages of any of the victims. Sources did confirm on Friday that one of the young victims was an elementary student at Bedford Road School. Reports and sources describe the other child as pre-school age.

Several media outlets have reported that police are treating the incident as an apparent murder-suicide investigation but Pleasantville law enforcement officials have not yet confirmed that. An update from authorities is expected Friday evening.

At 1:50 p.m. Thursday, police were asked to perform a welfare check at 57 Romer Ave. because the children did not arrive at school.

Officers entered the home to discover the bodies. Causes of death have not yet been determined.

“We’re currently handling this as a crime scene,” the chief said.

Police blocked off the end of Romer Avenue closest to Pleasantville High School late Thursday afternoon. The house is less than a block from the high school.

“As you can imagine our hearts are broken at the news of this incredible tragedy,” said Fox-Alter, holding back tears at the press briefing. “This is a very small community and it impacts all of us in this small village.”

An Examiner reporter spoke with two local women on Friday morning in Pleasantville. Neither wanted to provide their name.

“Sad. Horrible,” one woman said. ” I heard the mother was a wonderful person.”

With tears in her eyes, a parent from the Bedford Road School said her child was a good friend of one of the children, a boy. The woman’s child was looking forward to celebrating the boy’s birthday with him soon.

“Pleasantville is an incredibly special community,” Galotti’s note concluded. “Through their sorrow, our residents will come together to surround one another with love and kindness. Our district stands ready to assist in any way possible.”

Fox-Alter also sent out an email Friday, noting how the community “will support each other with kindness, compassion and care.”

The superintendent provided an article from the National Association of School Psychologists on discussing grief with children and adolescence.

In an interview with The Examiner, Fox-Alter noted how staff at all three schools were available throughout the day, including accredited APA psychology counselors, clinical staff and interns.

“We had a comprehensive team ready and available to individually speak and counsel teachers, staff students and parents,” she said. “We had an extra presence in the hallways and office staff were also available to meet with kids.”

In the morning before students arrived, school officials started to prepare for individual counseling with students, the superintendent explained. A room was set up where students and teachers and parents could come to seek advice. Teachers were also advised to carefully observe students’ behavior.

This story is developing, check back for more details as they become available. Abby Luby contributed to this report.