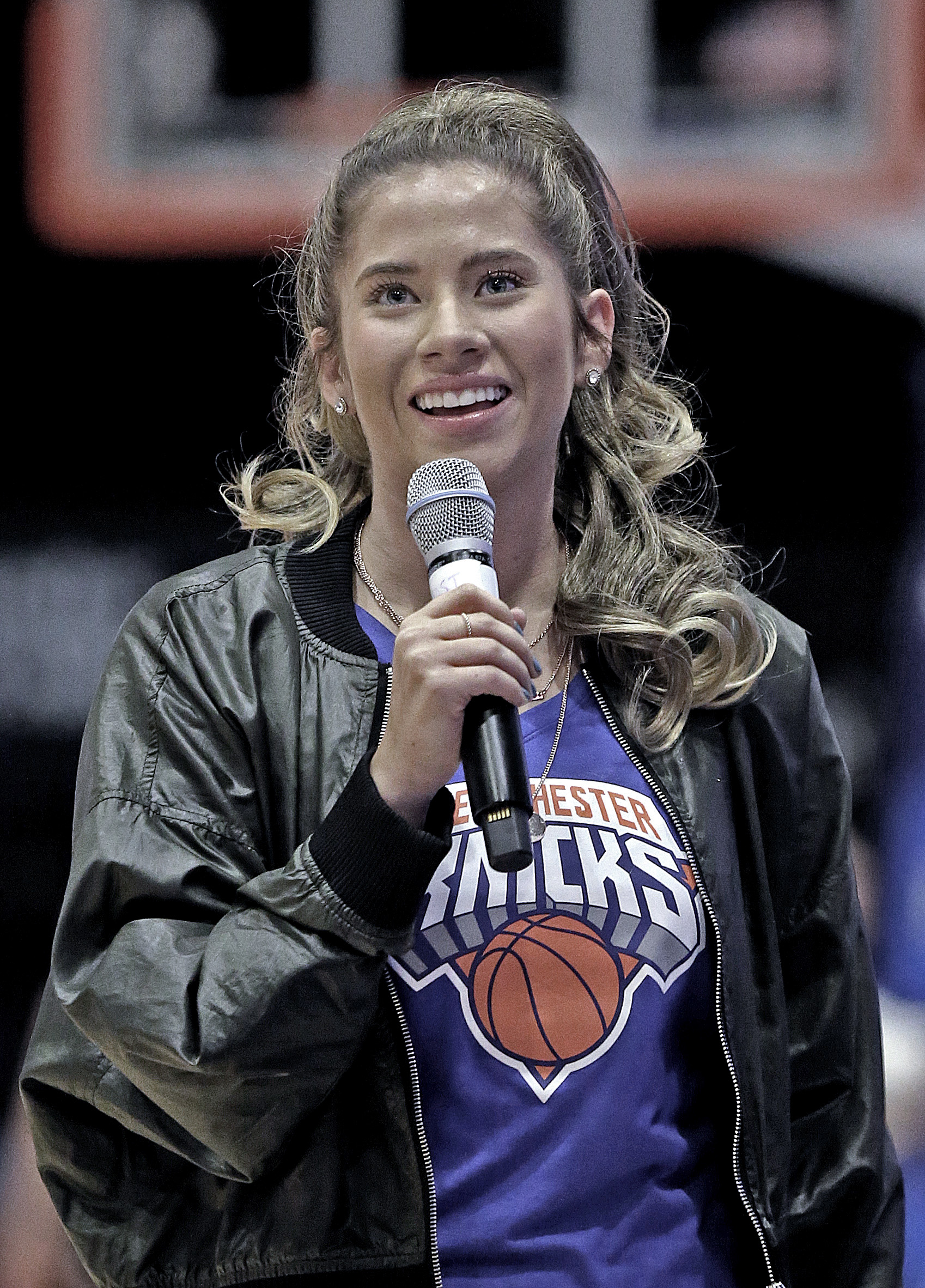 In-game host Tara Bernstein entertains the fans during a Westchester Knicks
game at the County Center this past season.

It’s been just over a year since Tara Bernstein played her final game for the Pace University softball team.

Since then, the affable 22-year-old Queens, New York native with big dreams has taken on the challenge of pursuing a career path in the ever-changing world of sports media. An integral member of the first Setter team to win the Northeast-10 softball championship, Bernstein is now determined to become a name to know in the years ahead.

Armed with a degree in journalism from Pace, where multiple internships helped prepare her for the uncertain journey awaiting, Bernstein has been on a whirlwind tour of diverse adventures ever since her athletic career came to an end. She was the in-game host for Westchester Knicks games at the County Center during the winter and currently serves as the pregame host for the Mets at Citi Field. In between, she’s done some modeling, competed in a beauty pageant and been the red-carpet reporter for a popular Yankee pitcher’s benefit softball event.

“Being a young female and being well-rounded in the field, not just speaking in front of the camera, but also doing the behind-the-scenes things, I think that was super important,” said Bernstein last week, looking back at some of the experience she gained while an undergraduate. “Softball created so many open doors for me. It was a huge part of me and taught me a lot about work ethic.”

An All-City shortstop at Bayside High School, she arrived in Pleasantville in the fall of 2014 secure with her decision to leave her backyard, yet remain within easy reach of the opportunities available in New York City. 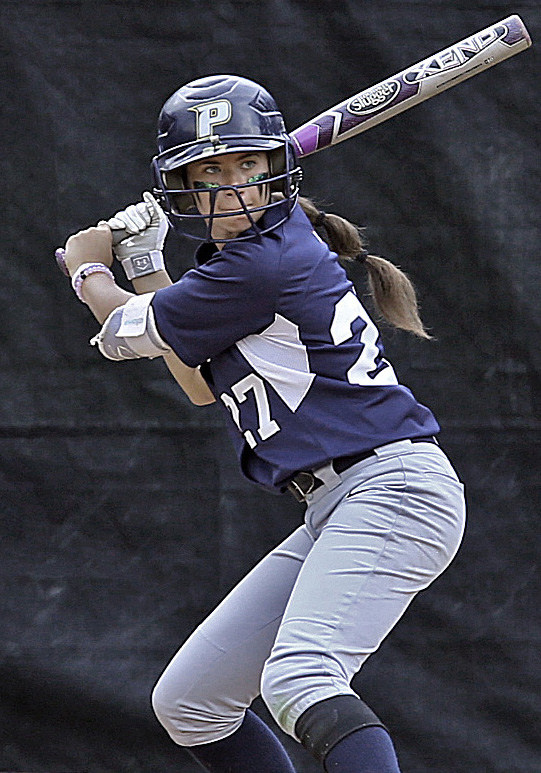 Tara Bernstein awaits a pitch during her recent playing days on the Pace
University softball team.

“I wanted something a little bit different and a little bit away from home,” she said. “So Pace was definitely the right option. I decided to play college softball here in a competitive NE-10 Conference and also be close enough to the city that I could take on the internships as well.”

The highlight of her freshman softball season came during a doubleheader sweep of Le Moyne when she blasted a home run in both games. Her sophomore year, she started 41 games in the outfield for the Setters, who wound up defeating Southern New Hampshire in the NE 10’s title game on their own Briarcliff campus home field.

Bernstein’s senior season didn’t go quite as planned with an injury delaying its start for her, but in limited playing time she finished with a team-best .425 on-base percentage.

“The first few games, I had a concussion and I was out for a month or two,” she said. “So that was really hard. But it just taught me to bounce back from adversity.”

Despite the diminished role she had her final season, Bernstein still managed to leave a lasting impression on her coach.

“Tara Bernstein was a great competitor for Pace softball throughout the course of her four years,” said Claudia Stabile, who has been guiding the Setters since 1982. “She was a mainstay in our outfield and truly contributed to our success. She was one of the reasons we won the conference tournament back in 2016. As a player, she was outstanding. As a student, as an athlete, as a person, you cannot find a more wonderful, conscientious person who has been a true asset. She’s meant so much to Pace University and Pace athletics as a contributor just because of the person she is.”

That person she is, with a combination of girl-next-door charm and an extrovert’s supreme confidence, was largely molded by her father, Joel, a musician who played with a couple of the most well-known local rock & roll bands back in the 1980s heyday of the Long Island club scene.

“My dad is a star,” she said. “He literally is the music guru everywhere. Everyone looks up to him when it comes to music, and he’s super talented. He’s someone I just look up to because he taught me if you’re gonna do something, at least do it 110 percent.”

The way she figures it now, the success she’s already having in her evolving career would not have been nearly as likely without the guidance and support she received from him.

“He is super hard on me,” Bernstein conceded. “At first, I would always be saying, ‘Oh no, why is he so hard on me?’ But now I’m realizing years later it was for a reason and it’s the cause of where I am today. His work ethic and him pushing me to be the best I can be, sometimes I really didn’t like it and there were sacrifices and consequences. But he definitely has the driven, confident attitude where if he’s gonna do something, he’s gonna do it great.”

Bernstein is now able to repay him with tickets to games at Citi Field because what started out as a part-time internship with the Mets has turned into a full-time hosting role requiring her presence at all 81 home games. A big fan of the team, she relishes each day she gets to go to the ballpark in Flushing.

“Being a lifelong Met fan, I have my own brick outside the stadium,” she said. “I would beg my dad to take me to the games. Now I’m just here every single game and I’m able to bring my family into the games and enjoy the moment. Baseball, the game is amazing. It’s just a good place to be. If fans were to come to a game, they could catch me all around the ballpark or on the field or just by looking up at the screens.”

While Bernstein was quite familiar with the home of the Mets before she started working there, she had never been inside the County Center in White Plains prior to taking on the ubiquitous role of in-game host for the G League’s Westchester Knicks last November. During most of the timeouts, she could be found standing somewhere close to the midcourt line, microphone in hand, either presiding over a fan contest or leading kids in a rendition of ‘Baby Shark Dance’ or maybe even helping launch free Knicks T-shirts into the balcony.

“It was just super fun to see all these die-hard fans come to the game, remember my name, ask me questions,” she said of her first season with the team. “I got to create a lot of friendships at the arena. It’s really great and I love it. It brings out my personality. I was able to just walk around, say hello to fans, pick them for contests, get to know them and just really hype up the crowds so they get the team going.”

But her hosting roles with the Mets and Westchester Knicks are just a part of the impressive résumé Bernstein has been compiling. In college, she did some broadcasting of Pace basketball games and had internships with NY1 News and NBC Sports Radio. She also covered the 2017 All-Star Game in Miami for Major League Baseball.

Her red-carpet reporting for CC Sabathia’s Celebrity Softball Game benefit at Yankee Stadium a month ago enabled her to add to the star-studded list of athletes she has interviewed, among them Derek Jeter, Mariano Rivera, Tracy McGrady and her two favorites so far — Tiki Barber and Joe Torre.

“It’s funny, when I interview these celebrities or public figures, I treat them like they’re just normal, regular people and like they’re my friend,” she said. “So when I have conversations with them, it’s not even thinking about questions. What’s something that’s unique about them people don’t really know? Just adding something a little different about them. I also create cool handshakes with them because that brings out my softball personality into my media personality.”

If that isn’t enough, Bernstein also recently completed a model shoot and billboard for Modell’s Sporting Goods, mentors kids at Middle School 95 in the Bronx, will be teaching a broadcasting class at Hofstra University this summer and then competing in the Miss Long Island pageant in August.

“A big part of it for me,” she said, “being a young woman in the field, playing a college sport or a sport my entire life, it’s like you don’t need to have one identity. You can have multiple identities. What I mean by that, for me, it’s not just being a pretty face on camera. It’s having substance within, being able to throw a ball, being able to lift weights, but still able to smile and look girly on camera.

“It’s being multi-faceted and not having just one identity,” added Bernstein, who has been particularly inspired by softball star/ESPN broadcaster Jessica Mendoza. “I can be an actress, I can do CrossFit, I can be a host, I can be a reporter and still play in the dirt with softball. I’m looking forward to continuing to pursue all my gigs and just being humble and being that girl who’s from New York City. Going to small-town Pleasantville and living up here, just making my way through.”

Her former college coach, for one, is not about to bet against Bernstein achieving many of her lofty goals.

“The way she carries herself, displays herself, the maturity she has, we are very proud to say that she’s a Pace University athlete,” said Stabile. “There is no doubt in my mind that Tara Bernstein is gonna do terrific in the profession she so chooses. I think that if she’s given an opportunity, she’s gonna flourish.”