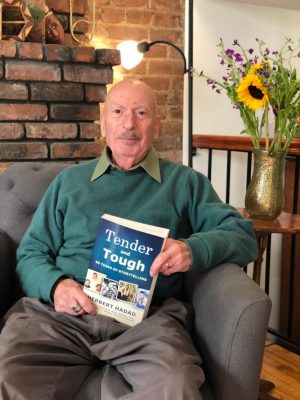 Herbert Hadad, a longtime reporter at multiple publications, at home with his new book, “Tender and Tough: 60 Years of Storytelling,” a compilation of some of his favorite essays and stories.

Herbert Hadad wrote hundreds of stories and essays for a wide range of publications during his journalism career that spanned more than a half-century.

While many appeared in The New York Times, Reader’s Digest, the International Herald Tribune and other well-known outlets, the Pleasantville resident thought that maybe some of them should somehow be reprised.

More than two years ago, Hadad started sifting through his files, coming across pieces about his writing career, his time as an aspiring featherweight boxer in Boston, his family, which includes four grandchildren and his wife Evelyn, his background as a Jewish Arab (his father immigrated from Syria in the 1920s) and many others on some of the fascinating people he covered through the decades.

Rather than confining them to his attic or computer files, Hadad decided to put together a compilation of his favorite works into a recently-released book “Tender and Tough: 60 Years of Storytelling.”

“I was getting on in years and I wrote hundreds of stories and essays, and although most appeared somewhere, I felt that the stories deserved a bigger audience or another chance, so I started to put the book together,” Hadad said.

He chose 95 of his favorites. There isn’t an overriding theme throughout the book or any connection from one to the next, just essays, columns and articles that were a good read or received strong reaction.

Hadad said one of his standout pieces was a story called “The Art of Waving.” He advocated for when people pass each other while walking on the street or along a hiking trail to wave. For the person who waves it costs them nothing but it could help make someone else’s day.

“I’m not saying it was the best story of my career but it’s one of the stories that got the most attention,” said Hadad, who had it picked up by multiple publications, including The Times, Reader’s Digest and Catholic Digest.

Another was the time Hadad was a boxer in his early twenties. He needed contact lenses in order to see properly. During a fight, he was actually wearing them when he was hit and went down. He took the eight count to gather himself, as he was trained to do, before rising to his feet ready to resume the fight.

“The referee came over and he looked me in the eye and said ‘You’re all through, you’re all through for the night. You’re glassy eyed,’” Hadad recalled. “He was staring at the contact lenses. It was probably illegal to wear them. I was very upset.”

While Hadad is a graduate of Northeastern University, he said that his real education in life wasn’t his formal schooling. It was getting a break as an overnight copy boy in the Boston Globe newsroom as well as his time as a boxer.

At the Globe, the old-school reporters took him under his wing, where he learned about day-in, day-out journalism. While he would leave for a paper in Keene, N.H. to begin his reporting career, he would return to the Globe afterwards before moving to New York to work for the Post and The Times.

The other most valuable part of his education was in the gym that was near the old Boston Garden. His trainer stressed that when facing an opponent, it doesn’t matter how tough he looks or talks, you keep your focus on the task at hand.

“That’s all posturing,” Hadad recalled him saying. “You hit them in the right place, they all fall down, and I’ve applied that to posturing politicians. You go after them. Don’t be fooled by appearances.”

Hadad said he hopes “Tender and Tough” is enjoyed by readers. Putting together the book brought back a flood of memories.

“That was part of the pleasure of reading the stories over,” he said. “In many cases, I hadn’t read them in a long, long time.”

The book is available at Amazon.com or by visiting his website at www.herberthadad.com.