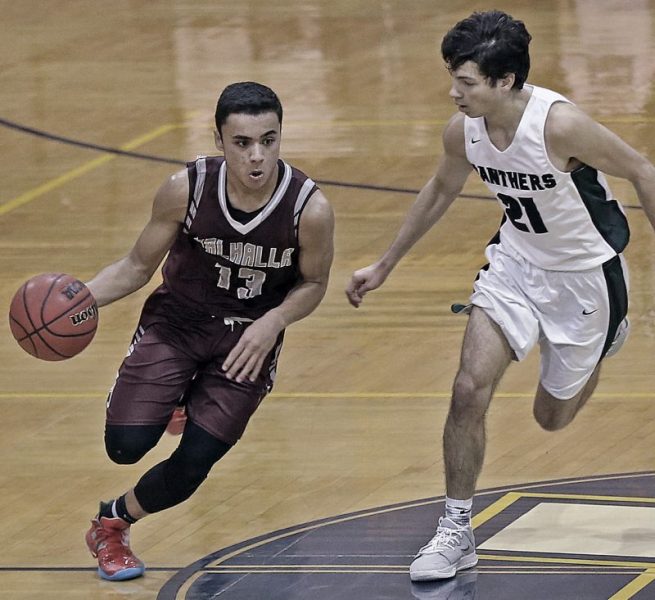 Valhalla’s Sebastian Pacheco is pressured by Pleasantville’s Christian DeJesus as he dribbles near midcourt in the final of the Lt. Garbarini Tournament.

A pair of 12-0 runs in the first half, one in the opening quarter and the other in the second, gave the Valhalla Vikings all the ammunition they would need to overwhelm Pleasantville in Friday night’s championship game of the 16th annual Lt. Charlies Garbarini Memorial Basketball Tournament.

Backcourt maestro Sebastian Pacheco scored a game-high 23 points, controlling the contest offensively and defensively, and Marlin Wise added 14 as the Vikings improved to 9-1 this season with a convincing 65-47 victory over the Panthers at Pace University’s Goldstein Fitness Center.

“We do have explosive ability when things go right,” said Vikings head coach Richard Clinchy shortly after his team had captured the tourney title for a second straight year. “We do have some explosive players and we have great speed. I’ve got 10 guys that I can use interchangeably. So we’re blessed with that sort of depth that allows you to play 94 feet every moment of the game if we want.”

It was the Panthers who jumped out to an early lead, getting a layup by Willie Cahill and a 3-pointer from the left corner by Nick Doto before the Vikings began their first blitz of the evening. By the time Rahsean Melvin capped the 12-0 burst with a turnaround jumper in the lane with 1:53 left in the opening quarter, the Valhalla lead had swelled to 13-5.

A pair of free throws by Christian DeJesus, who along with Doto led the Panthers with 11 points, brought Pleasantville within six points at the end of the first quarter. But Valhalla’s full-court defensive pressure soon took a big toll on the Panthers. The Vikings scored three buckets in the opening 75 seconds of the second quarter and their lead grew to 26-11 on a layup by Wise just over three minutes into the period.

“We knew we were gonna have to control their runs,” said Panther coach Bob Jordon. “They’re a good team that can run on you, and for about a minute and a half, both in the first and second quarter, we allowed their runs to happen.”

The Panthers got a one-hander in the lane from Aidan Lynch to briefly slow the Vikings’ surge. But then Pacheco spearheaded the second 12-0 Valhalla spurt of the night with three straight layups and Pleasantville suddenly found itself trailing 38-13 with 1:47 left in the half. At the break, the Panthers were faced with a 40-16 deficit.

“It was those two-minute runs in those two quarters that bumped them up to 20, 25 points at halftime,” said Jordon, who conceded it was difficult to prepare for the Valhalla pressure in practice. “No, you can’t simulate speed. The best thing that we tried to do is put additional players on the floor. We had a nice scheme for breaking the press, but then we didn’t take care of the ball on the offensive side.”

The Vikings opened up their largest lead of the evening, 26 points, when Pacheco dished to Wise for a layup just nine seconds into the third quarter. A 13-7 run from the Panthers, highlighted by five quick points by Noto on a 3-pointer and fast-break layup, only managed to cut the huge Valhalla cushion to 20 points. The fourth quarter began with the Vikings leading 57-35.

A 3-point shot by Valhalla’s James McAndrew 10 seconds into the final period was soon followed by an 8-0 Pleasantville run that left Clinchy contemplating bringing his starters back on the floor.

“Yeah, I think another basket or two, I was gonna,” he said. “I remember one game a long time ago when I waited too long. And I wasn’t gonna wait too long again.”

The stellar play of his senior point guard, Pacheco, has also caused Clinchy to look back at his long coaching career for comparisons.

“Sebastian has the unique and extraordinary ability to know what’s gonna happen on a basketball court before it happens,” said Clinchy. “I’ve had two players, one I coached in college and one in high school 30 years ago, who had the same sort of ability. And no one else. It is Division 1, almost pro. Some people are faster, some may dribble better, some shoot better. But no one anticipates the game like he can, on defense especially. It is a gift for him to have it, and it is a gift for me to coach it.”

Pacheco certainly put his stamp on the game during the second quarter when the Vikings were outscoring Pleasantville 26-9. He had five baskets and left the Panthers with an impossible task in the second half — getting back in the game.

“We talked to ‘em at halftime that, first of all, it’s two points at a time, obviously,” said Jordon of his message to his players. “But also about pride. They felt like they were a little embarrassed about the way they performed in front of a nice crowd and a great place to play. That was the key, talking about their pride. Let’s have a little pride going into the second half, leave it all out on the floor.”

Though they never really threatened in the second half, the Panthers did manage to outscore Valhalla by a 31-25 margin over the final two quarters.

“It’s a tribute to the coaches and those kids,” said an impressed Clinchy. “They came out and played harder than we did in the second half and they closed the gap. That’s what sports teaches you — to be tough and never give up. I thought they played like champions even though we were lucky enough to win the trophy.”