Arts & Entertainment Business The Examiner
May 17, 2022May 19, 2022 Martin Wilbur Pleasantville
We are part of The Trust Project 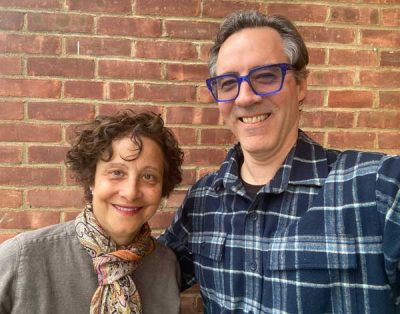 Editor’s Note: On Wednesday morning, May 18, the organizers of Thursday evening’s screening announced that it has been postponed to an undetermined date due to the recent increase in COVID-19 cases.

In the days and weeks following the Sept. 11 terrorist attacks, Andrea Garbarini received American flags from all over the United States from both children and adults.

Some were hand-stitched, others were drawn while some appeared on shirts or other objects.

It meant a lot to Garbarini to receive the unsolicited gifts because her husband, Charles, was one of the 343 New York City firefighters killed that day.

“I looked at those flags and I hung some of them up on my walls, and I looked at them, and to me it represented a collective hug and a unity with this country,” Garbarini said. “And I look at it fondly.”

But over the past five or six years, Garbarini said she started feeling the flag was being used differently. Like so much else in the country, it was being politicized, she felt particularly by the supporters of former President Donald Trump’s administration. Some groups felt like the flag was being co-opted or no longer or never did represent them.

In 2019, Garbarini decided to make a documentary about how Americans feel about the stars and stripes, whether they believe the country is polarized and what can be done to pull it back together. That film, “Flagged,” which recently won Best Short Documentary at the Piermont Film Festival in Rockland County, will be the next screening for Films on Purpose this Thursday evening, a Pleasantville-based organization that periodically shows movies with social justice themes followed by a panel discussion.

Garbarini teamed with fellow Pleasantville resident Shane McGaffey, the village’s television station manager, to produce the 38-minute film. They not only interviewed people locally, but they traveled the countryside, particularly in the south where in some communities displaying the flag on your property is expected.

They spoke to Black people, Native Americans, political consultants, attended Trump rallies and ended up in Washington, D.C. on Jan. 6, 2021, when in some instances the flag was literally being used as a weapon.

McGaffey said he was especially struck by a story a woman told when putting her house on the market. The real estate agent suggested she remove her flag because she risked polarizing what could be a significant percentage of prospective buyers.

“We’ve come to a place now where our flag, in my mind, is supposed to represent everybody but people no longer have that feeling,” he said. “How did we get there?”

“Flagged” is Garbarini’s third film. In 2011, she collaborated with three other 9/11 widows for a film for the 10th anniversary of Sept. 11. In 2018, her second film followed several busloads of grandmothers from New York to McAllen, Texas who protested the policy of separating migrant children from their parents at the border.

In a country where there is not longer agreement on a basic set of facts in many instances, Garbarini said the question may be whether American society can stop and listen to people who they don’t agree with and find common ground.

“You can agree or disagree with the people who you talk to on a daily basis. One thing is for sure, that we actually, I think, really do want the same things when it comes down to it,” Garbarini said. “Basically, we want our kids to be safe, we want good schools for our children, people should have food on their table and a roof over their head and a job that’s secure and a living wage. I think everybody really believes in that.”

The evening begins this Thursday with a reception at 6:30 p.m. on the porch of the Marmaduke Forster House, located at 415 Bedford Rd. in Pleasantville. The screening will be at 7 p.m. across the street at the Pleasantville Presbyterian Church.

For the panel discussion, Garbarini and McGaffey will be joined by county attorney and former Pleasantville mayor John Nonna and Westchester political strategist Bill O’Reilly.

The screening is free. Anyone entering the church must be vaccinated and masked.

New Castle to Vote on Traffic Plan; Whole Foods Could Open By Saturday

Nonprofit Organization TAPs Into the Potential of Small Businesses