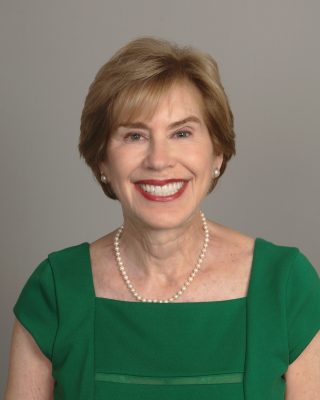 Village Board colleagues of Mount Kisco Deputy Mayor Jean Farber paid tribute to her 10 years of service to municipal government, praising her efforts to elevate the arts and local historical society while always providing a voice of reason.

Farber, a Democrat, who has completed her fifth two-year term on the board, decided against running for re-election this year. She is being replaced by former trustee Anthony Markus, who had previously served on the board for 14 years before losing his seat in 2017. He will be sworn in along with returning Trustee Karen Schleimer, who both ran unopposed on the Democratic ticket last month.

Farber thanked a long list of current and former village officials at her last board meeting on Nov. 16 as well as residents for having provided her the privilege to serve.

“I have been so fortunate to have met so many of you,” said Farber, 72, a real estate broker. “Thank you all for the most amazing 10 years of my life. Please stay the course, be safe, give a shout-out when you can. Thank you, thank you, thank you very, very much.”

She mentioned in early March and again at her last meeting, which once again was a virtual meeting, that she thought it was time someone else had the opportunity to serve on the board.

Board members sent a photo album and a small desktop sculpture to Farber’s home, both of which bear her name followed by the phrase “10 years of service.”

Her colleagues recognized her efforts working alongside the Mount Kisco Arts Council to bring a variety of arts programming to the village during her tenure, including free concerts in the public space between the library and Village Hall, art exhibits at the library and pop-up exhibits. Farber was also credited with working with the Kirby Commons developers to have them provide a public arts space for the council within its proposed development.

In addition, she worked with the Mount Kisco Historical Society to move the organization to its new home at 40 Green St., using a portion of the former village police department’s home.

Mayor Gina Picinich said along with her accomplishments, finding common ground was one of the hallmarks of Farber’s time on the board.

“You always listen and work to seek compromise to find the best, most effective    solutions for the community, and you always represent our village and yourself with grace and class,” Picinich said.

“(You’ve) been a tremendously important person on our board,” he said. “She has brought a light touch, a lovely smile and an impressive balance and stability to her decisions. I’ve always enjoyed working with her and I will miss her presence on the board.”

Trustee Karen Schleimer, who was Farber’s running mate four times from 2012 to 2018, called her “my mentor.”

“To spearhead the arts and music, these programs and what that has meant for everyone; it’s available to everyone without charge. This is just the most wonderful thing everyone could ever bring to Mount Kisco,” Schleimer said.

Trustee David Squirrell, who has known Farber for about 25 years, said he was certain that she would find a way to contribute to the community without being on the Village Board.

“We will miss you. We will definitely miss you, but you love this town so much and you love to serve so much that I definitely feel that we’re going to be seeing a lot of you going forward,” he said.