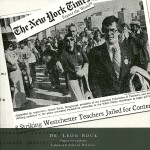 Thomas Kavunedus and Dr. Leon Bock may not be particularly well known outside the community they served during the defining moments in their careers. Now, decades later, their stories won’t be forgotten.

Kavunedus and Bock were adversaries in arguably the ugliest and most divisive chapter in New York State education history. Kavunedus, a retired teacher in the Lakeland School District in Shrub Oak, and Bock, the acting superintendent who later became its permanent chief administrator, were two of the key negotiators representing the teachers union and board of education, respectively, in 1977. That September, the district endured a two-month teachers strike, the impact of which reverberated throughout the state and still affects New York’s public sector union contracts today.

Nearly 35 years later Kavunedus and Bock have collaborated to write a book detailing the issues and dramatic and painful events leading up to the walkout, the strike itself and its aftermath. The 664-page “Struggle for Power: The Longest School Strike in New York State History,” is actually two books in one, with alternating chapters written by each co-author told from his perspective about the key events and personalities.

It may seem a bit surprising the two negotiating foes would collaborate on a project that could run the risk of opening old wounds but both men, who are well into their retirement, each had plenty to say years later. That was certainly the case for Kavunedus, 80, now living in Florida. Several years after his 1988 retirement, he started putting pen to paper about his recollections of the strike, which saw him and seven of his colleagues jailed for contempt.

Despite the contentiousness and each holding very different views of what happened, Bock, now 90, and Kavunedus have remained on speaking terms. Kavunedus recounted how after the strike Bock would travel from school to school in an attempt to repair damage with faculty. At the risk of ridicule by his colleagues, Kavunedus made sure to reach out to Bock during one visit.

“The bottom line was that each of us had a story to tell and we didn’t want to interfere with each other’s point of view,” Kavunedus said of the unique approach for the book.

Kavunedus said their accounts of the strike were not meant to be a completely accurate historical narrative but feature their personal stories and remembrances. Most of the other key players have died in the ensuing years.

The seeds of the conflict were actually sewn in 1970, two years before Bock was hired by the district to be Walter Panas High School’s principal. Seven years before the big showdown, the Lakeland Federation of Teachers staged a weeklong strike, causing widespread perception in the community that the board and the administration had caved into the union. At the time, Lakeland had the lowest wealth and highest tax ratio of any district in Westchester, making the teachers’ salary demands a sore point with factions of the community.

In the spring of 1977, with the teachers contract coming due and the federation having accepted a salary freeze for that year during a period of high inflation, they demanded a 6 percent increase. The board and administration were willing to go up only to 4 percent.

In his account, Bock wrote that the two sides didn’t appear that far apart in May and even expected an agreement to be in place by June. But confusion reigned when the union, in a vote by their executive board, deemed the board of education’s last offer to be inadequate. Their negotiating team was dismissed. Bock accused union leaders, including Kavunedus, of bargaining in bad faith.

With no settlement reached over the summer, a majority of the union voted to walk out. It was a monumental decision for the teachers, Kavunedus said, knowing they and their families were risking their livelihoods, careers and the disdain of the community along with the prospect of economic ruin. Also, in the 1970s, the state’s Taylor Law not only docked the teachers’ pay during the strike but fined them the equivalent of their pay that had to be paid to the district, which included accusations the district was prolonging the strike because it was profiting. Although the walkout ended on Nov. 9, most teachers didn’t get paid until April.

“Although there was hardship here, there was the sense that the teachers felt they had fought the good fight,” Kavunedus said.

Following the strike, there was a five-year push to revise the Taylor Law, which resulted in passage of the now hotly debated Triborough Amendment, which extends the terms of expired public sector union contracts until a new pact is reached.

For Kavunedus, the larger issues surrounding the strike are two-fold and still are debated today–the affordability of public education and the struggle between unions and the board.

Although painful, both authors claimed there were long-term gains for their sides. Kavunedus said within a decade the pay scale saw gains that put Lakeland teachers’ pay in line with surrounding districts. Bock said the majority of the community united and supported decades of district budgets.

There are issues the two authors will likely never agree on. That was evident at last month’s Lakeland Board of Education meeting, where district officials invited the pair to speak about the book. Bock held court for about a half hour. When he was done Kavunedus simply responded, “I disagree with everything he said.”