Skip to content
Government The White Plains Examiner
September 15, 2022 Martin Wilbur White Plains
We are part of The Trust Project

After President Richard Nixon left office in disgrace in 1974, he lamented that he would likely only be remembered for Watergate and his trip to China to restore relations with the Communist power.

Now, in his new book, “The Last Liberal Republican,” John Roy Price is opening eyes about how groundbreaking the Nixon presidency was – or tried to be – regarding many domestic issues as well.

Price had a front-row seat to the the 37th President’s first three years in office. After working for New York Gov. Nelson Rockefeller and holding a key role in Rockefeller’s 1968 campaign for the Republican nomination for president, he was asked to work on the Nixon general election campaign and then the administration, serving as executive secretary for urban affairs.

Price recently was interviewed by John Vorperian, host of “Beyond the Game” for the public access White Plains Community Media, and The Examiner about his book and the factors that led Nixon to push for reforms that would probably seem foreign to many Republicans today. (Nixon was a congressman and senator before becoming Dwight Eisenhower’s vice president.)

“He was all for and helped Eisenhower push programs in healthcare, on expansion of Social Security, and a large thing in healthcare was the Employer Sponsored Insurance, which he did through the tax code in 1954, which all of a sudden made healthcare accessible to millions and millions of families, for which the unions and the employers supported,” Price said.

Nixon wanted a national health insurance program and fought for coverage for prescription medication and pre-existing conditions 40 years before the Affordable Care Act became law, Price said. His views on healthcare were probably informed by his family’s struggles, he said.

“He watched two brothers die of tuberculosis with no insurance,” Price said. “His mother had to go (for) over a year each time to a sanitarium in Arizona with each of them and work with others there in order to pay for her sons’ care. This just buried itself into Nixon’s psyche. He really, gut-wise, believed in people having proper healthcare.”

Working with Democratic senators Edward Kennedy and Daniel Patrick Moynihan, a national program came within a whisker of passage in mid-1974, Price said. However, the effort was derailed by the increasing calls for Nixon to resign amid looming impeachment hearings stemming from the Watergate scandal. 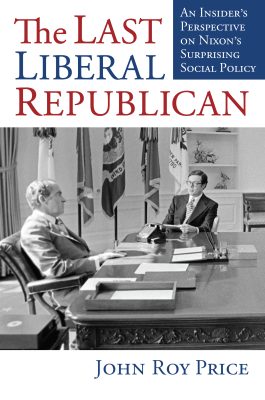 But with Nixon, it wasn’t just healthcare. During his presidency there was a strident national debate about welfare. Price said Nixon supported the ill-fated universal basic income legislation against the wishes of the overwhelming majority of his own cabinet. The proposal would have guaranteed income for the working poor – families at or below the federal poverty line – in hopes of improving the lives of the most vulnerable Americans, he said.

Other reforms during his administration were the expansion of the food stamp program, establishment of the Environmental Protection Agency and championing the 26th Amendment, which lowered the legal voting age from 21 to 18 years old.

Enabling Nixon to push his domestic agenda were very different political dynamics. Price said after Herbert Hoover’s failed presidency and the wildly popular programs introduced by FDR through the New Deal to help extricate the country from the grips of the Great Depression, Republicans largely nominated moderates for the presidency.

In fact, socially liberal Republicans, such as Rockefeller or New York Sen. Jacob Javits, were not particularly unusual.

Then there were the old “Dixiecrats,” the southern Democratic segregationists, so there was more compromise between other Democrats and Republicans.

Working with the president on domestic issues, Price never saw Nixon’s darker side. One adviser described to Price that Nixon “moves from rage to generosity, from eloquence to something other; it’s just who he is.”

“I didn’t see that,” Price said. “I saw policy and intellectual engagement and some humor.”

Despite now just over a half-century since working in the administration, Price, who went on to a nearly 30-year career in the financial industry, looks back fondly on his days in the White House.

“(Nixon) was a serious man, a serious policymaker and I am grateful for the time that I had and to have been able to interest a president in what I thought were tremendously important efforts in social policy,” Price said.