Skip to content
Politics The Northern Westchester Examiner
March 17, 2021February 23, 2022 Rick Pezzullo Buchanan
We are part of The Trust Project

Jackson, who has been a trustee since 2012, finished third with 164, while Pasquale, a seven-year board member, was fourth with 152.

Murray and Capicotti, who take office on April 1, ran on the Republican, Conservative and Buchanan United lines, while Jackson and Pasquale appeared on the Democratic and Resident’s lines.

There are approximately 1,200 registered voters in Buchanan.

“We came up short,” Jackson said.

Murray, who is chairman of the village’s Planning Board and has worked at Indian Point for the last 29 years, maintained a flier distributed by Jackson and Pasquale that addressed comments Murray had made about certain issues worked against the incumbents.

“I’m very happy that the residents of the Village of Buchanan were able to see through the very negative campaign that was selectively waged against myself and my running mate. After our opponents placed slanderous literature at the doorsteps of up to 100 residents, Anthony and I felt invigorated to go door to door and show the people the truth. Some residents were disgusted at the accusations and personnel attacks in their literature,” Murray stated.

“All of my campaigns have been run on a positive outlook on the future. Although there is no panacea for the massive revenue loss affecting our village, creative thinking and fresh ideas will help soften the impact. I look forward to serving the residents of the village again as a trustee,” Murray continued. “I will continue to be honest and straight forward with every resident on every issue as I have in the past. My decision-making process will be based on what is in the best interest of all residents not a chosen few. I will continually research all expenditures and will approve only the ones that show a clear benefit to the residents.”

Capicotti, a married father of five, has worked as a Local 137 Operating Engineer for 29 years. He is a board member of Our Lady of Mt. Carmel Society and has followed in the footsteps of his well-known deceased father and uncle in coordinating the spectacular fireworks display at the annual Italian Feast in Verplanck.

It was reported that fireworks were seen in Verplanck Tuesday night after the election results were tabulated. 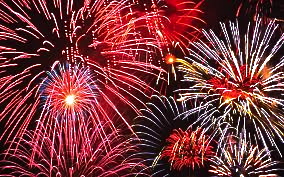 Push Intensifies for Raising the Age of Adult Prosecution to 18

Yorktown Working on Strategy for Businesses to Reopen