Peekskill High School students organized Westchester’s only March for Our Lives rally Saturday morning, urging leaders locally and around the nation to pass gun control measures as a result of the recent mass shootings.

The rally was one of more than 300 gatherings around the country to highlight the issue and call for legislative action. The students were among several hundred community members, including teachers and representatives from the New York State United Teachers and educators from local unions, who marched and spoke passionately about how new legislation must be passed to stem the tide of unnecessary deaths.

“We are here to say enough is enough,” said Angeline Carlos Caceres, completing her junior year at Peekskill High School and the lead organizer of the event. “What will it take to create safe communities? Everywhere we look gun violence is decimating our families and communities, whether it’s the mass shootings in shopping malls, concerts, schools and places of worship, the retaliatory gun violence in urban neighborhoods, haunted by the legacy of economic disinvestment, racism and poverty or the solitary suicides committed nationwide with increasing frequency. Gun violence adds up.”

Those who attended the rally first did about a 25-minute loop around downtown that started and ended in front of the Field Library on Nelson Avenue. The crowd intermittently chanted slogans such as “End gun violence, stop the silence” and “What do we want? Safe schools. When do we want it? Now?”

Another student, Alexis Fernandez, read the names of the children who were gunned down at Sandy Hook Elementary School in Newtown, Conn. nearly 10 years ago. She and her classmates were also in first grade during that shooting and will be graduating high school next June.

Similarly, she read some of the names of the students killed in Parkland, Fla. in 2018 and Uvalde, Texas last month. They will never experience the things in life that most take for granted, Fernandez said.

“The damage cannot be reversed, and while my plans are set to change, gun laws still have not, and the question still remains – children or guns?” she said. “The answer is painfully evident and yet the decision has not been made by our legislative officials.”

Some speakers called for Congress to pass measures that will make getting access to guns more difficult. Safe storage laws, red flag laws to keep firearms out of the hands of those with mental illness and eliminating the ability to buy guns with credit should all be considered, protestors said.

Kara McCormick-Lyons, president of the White Plains Teachers Association, said it was important for her colleagues from throughout the region to support the students pleading for change because they represent the future. She said this time there must be action because many teachers and students now think about the dangers of being in school on a regular basis.

Tom McMahon, a Mahopac School District teacher, said children being shot to death in schools is a uniquely American problem. Other countries have criminals, people suffering from mental illness, the same video games and music, which are all reasons that some gun supporters cite as reasons for the mounting tragedies, he said.

What is different is the proliferation of guns, particularly assault-style weapons such as the AR-15.

“Their children aren’t mowed down by gunmen every school year,” McMahon said. “Our country offers thoughts and prayer and ideas like arming teachers, making Kevlar backpacks for our kids, turning schools into fortresses, and every other crazy idea you could imagine, all to prevent actually addressing assault weapons. Let’s be clear – it’s the guns. They are what needs to be legislated.”

Several speakers noted that the rally was on the eve of the sixth anniversary of the Pulse nightclub shooting in Orlando, Fla., which killed 49 people and wounded 53. But similar to after Sandy Hook, Las Vegas, Parkland and other shootings, nothing changed. Since Dec. 14, 2012, when 20 first-graders and six teachers and staff members were killed at Sandy Hook, there have been 948 school shootings in the United States, said Ariana Okoth, a Peekskill High School junior who helped organize the rally.

Peekskill resident Sol Miranda said those who are tired of the carnage must vote and get rid of all the elected officials who have promised change but have failed to deliver.

“Rage has taken me hostage because even though there are more people marching and engaging in this cause, the mass shootings are increasing,” Miranda said. “Where’s the change?”

Rose Rowland, a former chapter president of Brady: United Against Gun Violence, said she is tired of the deaths, those who believe that arming teachers will be effective and thoughts and prayers. She is also fed up with those who have pledged to help but have failed to accomplish anything.

“I am tired of candidates and politicians who say the right things when they are running, and when they get (into office), they cave,” Rowland said.

While children should be enjoying the experience of going to school and having teachers and administrators enjoy students’ progress, too much time is spent on securing schools from intruders and potential attackers, said Peekskill Superintendent of Schools Dr. David Mauricio.

“We are in front of a library. I would rather be here fighting for books in our classrooms then fighting what we’re asking for – the very simple ability that our children need to come home,” Mauricio said. 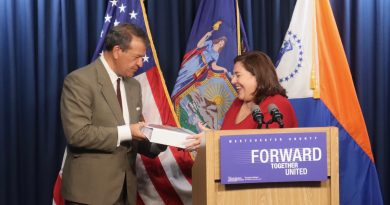