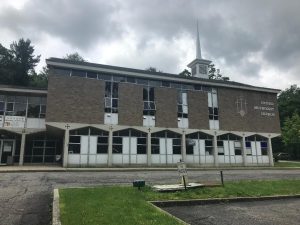 The Pleasantville United Methodist Church had its congregation disband on Sunday. At the end the church was down to seven members.

Word of the demise of the dwindling congregation, which has worshipped at the church located at 70 Bedford Rd. since the early 1960s, spread Sunday following a social media post by Nathan Vanderslice, who is listed on the church’s website as a head usher.

The development was confirmed to The Examiner on Monday by Rev. Dr. Denise Smartt Sears, district superintendent for the Metropolitan District of the New York Conference for the United Methodist Church. Sears said that the annual conference on June 8 approved the resolution to close the church.

“It is with a heavy heart that the remaining seven members of Pleasantville United Methodist Church voted to cease to exist as a worshiping community,” Sears said in a statement.

Attempts to reach Pastor Johnny Ceasar and some of the remaining members on Monday were unsuccessful.

Sears said that Pleasantville United Methodist Church’s history dates back to 1780. It grew out of a home on Bear Ridge and was part of the Croton Circuit of the Methodist Class Meeting. The congregation was known for its vibrant music ministry and church school, Sears said.

However, over the past 20 years, she said parishioners continued to move out of the area and new congregants weren’t found to replace them.

For most of that time, the church relied on its annual Christmas tree sale in a portion of its parking lot to remain solvent, Sears said. However, last year the tree sale was discontinued.

Some community members posted that they were sad to see the congregation leave. Pleasantville Mayor Peter Scherer said he was in that camp.

“It has a long, long history in Pleasantville…and I think I’m right in saying that at one point there actually were two Methodist churches in Pleasantville,” Scherer said. “A significant piece of history for sure. Obviously, times change, conditions change but I am always sorry to think that institutions that have served our community in ways large and small end up no longer being viable.”

Within hours of word spreading that the church had disbanded, speculation rose about what’s next for the site. Vanderslice’s post mentioned that the Se Kwang Korean Presbyterian Church, which has been renting space at the Methodist church for several years, has been in negotiations to potentially buy the property.

If that fails to materialize and it is not used for a religious purpose, the roughly four-acre parcel is zoned for single-family residential, Scherer said.

During the past seven or eight years, the church had reached out to two separate entities that develop assisted living projects in hopes of selling the land. However, the two companies, Benchmark Senior Living and Sunrise Senior Living, were unable to convince enough members of the Pleasantville Village Board to rezone the property to accommodate an assisted living project.

Other Methodist churches in the area are located in Valhalla, Mount Kisco, Ossining and Tarrytown.

Lindsay Emery contributed to this article.