A six-month, multi-police agency investigation led to the seizure of more than 100 illegal weapons and the arrest of 11 individuals in Westchester and Putnam counties last week.

Search warrants were executed Jan. 25 at eight locations in both counties by local, county and federal law enforcement investigators as part of an operation dubbed “Operation Casper” since it involved so-called ghost guns, which are weapons without serial numbers that can’t be traced.

Rifles, handguns and high-capacity drug magazines, similar to what were used in the recent murders of two New York City police officers, were confiscated, along with several silencers, ballistic vests, counterfeit police shields and quantities of ammunition.

“It’s a sobering reminder of what tools exist out there to commit crimes and commit deaths,” Westchester County Executive George Latimer remarked at a press briefing Jan. 27 at the Westchester County Police Academy in Valhalla where a large contingent of police officers from across the region and media were shown tables of weapons.

The probe was launched in June 2021 when police departments in Westchester, along with the Westchester District Attorney’s Office and the Federal Bureau of Investigation, created a task force to address an influx of ghost guns and other illegal firearms in the Westchester. Detectives in the multi-agency Real Time Crime Center, assisted by the FBI Safe Streets Task Force, New York City Police Department, Putnam Sheriff’s Office and the Rockland County District Attorney’s Office, were tasked with finding ways to reduce gun crimes and prevent violence.

“This doesn’t happen overnight. It is a monumental task,” said Westchester District Attorney Mimi Rocah. “There are too many guns on our streets, and they are getting into the wrong hands. We are not immune to gun violence. Any one of these guns could have wreaked havoc.”

In Yorktown, Westchester County Police arrested Christopher Canzone, 49, of 1700 Baptist Church Road, on charges of criminal possession of a weapon in the first degree when approximately nine pistols and revolvers and seven assault rifles were seized.

“We need these criminals to serve hard time,” Yorktown Police Chief Robert Noble said. “You just never know who you are pulling over. We live in a very safe community, but in every safe community there are a few bad apples.”

“On these tables are examples of when law enforcement cooperate and collaborate,” McConville said. “If we are able to continue this, you will see a reduction in violent crime.”

The Sheriff’s Department and FBI Safe Streets Task Force jointly charged Adam DiMaggio, 43, of 92 Lincoln Drive in Carmel, with the federal offense of unlawful possession or receipt of a firearm or ammunition by a prohibited person.

Two other suspects were charged in Harrison and New Rochelle.

“We didn’t just get guns off the street. We git them from people who aren’t supposed to have them,” Rocah said. 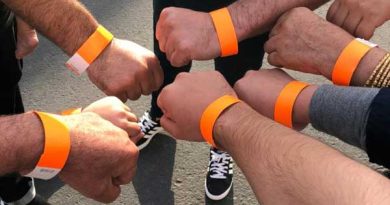 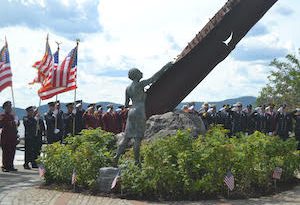