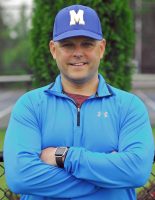 New Mahopac football Coach Dominick DeMatteo stands before the scoreboard he hopes to light up with points in future years.

Lodewick to Serve as Peekskill A.D.

Mahopac High crafted a multi-generation-shaping move last Thursday when its Superintendent Dr. Dennis Creedon anointed Dominick DeMatteo as P.E. teacher and leader of its football program, and the BOE appointed him as such behind a 9-0 verdict that wasn’t always as sure a thing as it appears.

Make no mistake, there was a vocal minority, who chirped loudly; critical of the move for reasons beyond actual reason. But the will of the people won out, for a change: The greater good prevailed in this instance, and Mahopac, once the upper crust of the Section 1 sports circuit, may have finally turned the corner it’s been boxed into the last four-five years.

“The board of education and the community is excited to welcome Coach DeMatteo to the position of head varsity football coach,” said Mahopac BOE President Brian Mahoney, who was instrumental to the cause and effect of the process. “However, and more importantly, was Mr. DeMatteo’s ability to connect and speak with integrity and experience about teaching physical education to the students of Mahopac. I, personally, was impressed to learn about new initiatives in teaching physical education, which includes the incorporation of both dance and yoga; pedagogical skills that can reach more students than the development and implementation of an X-and-O offense run by our football team.”

The communities black eye, bludgeoned by a series of off-field incidents and mishaps stemming from the unfortunate Mount Vernon occurrence back in March of 2014, has been a festering wound for quite some time now. But by approving DeMatteo as its football coach the district seemingly took a step toward rectification, in my opinion.

The 45-year old DeMatteo comes to Mahopac via Nyack High School where he was a teacher, dean and football coach after the district hired him last spring, which was preceded by a successful nine-year stint at Arlington High School. DeMatteo, who has resided in Mahopac for 12 years with his wife Dianne, and their two boys Anthony (12) and DJ (10), replaces Mark Langella, who was not reappointed after a one-year stint on the Indian sideline (the district did not renew his contract after a 3-6 campaign last fall).

“Nyack Superintendent, Dr. James Montesano, Principal, Ms. Nicole Saieva & Athletic Director, Mr. Joe Sigillo, are three of the most dynamic educators I have ever worked with and three of the finest people I have ever met,” DeMatteo said. “With that being said, I am humbled and grateful for the opportunity to serve as an educator in the roles of Physical Education Teacher and Head Football Coach for the Mahopac Central School District. My wife I have lived in the Mahopac community with our sons for the past 12 years and we are proud community members. I am excited to have the opportunity to serve in the school district that has provided a wonderful teaching and learning atmosphere for our sons, as well as, the community that has embraced our family and where we have many friends and long-standing relationships.”

Many of them turned out in force at a Mahopac Board of Education work session on Monday, June 12th to let the board know how they felt about DeMatteo. Each person that spoke presented a clear and present message about the need to make Mahopac relevant again, and that by approving DeMatteo they would be getting a world class leader with a proven track record. It clearly resonated with the board, which, despite some hemming and hawing, did the right thing.

This isn’t intended as a knock on Langella, who served the program as an assistant to former Coach Tom Donahoe, for much of a decade. It’s simply a declaration that this particular change in leadership is something of a generational shift that might be felt for years by scores of young men who will follow “The DeMatteo Methodology”; an ideology crafted by his father, Tony, a two-time state champion (Roosevelt in 1996 and Somers in 2016) who is just 30 wins short of becoming the all-time leader in NYS.

DeMatteo is his father’s son, make no mistake. Football is life, football is family, and they present a unique recipe that makes the last kid on the roster feel as important as the star of the team. The blueprint essentially requires student athletes to play multiple sports whenever possible, to shun specialization and provide a willing commitment to all the athletic programs within the district. Every player has an important role, a niche on the team. The DeMatteo’s stress this.

“Every player, every kid… they all have value,” DeMatteo said. “No other coach has influenced my life professionally or personally more than my father. He has laid the foundation, designed the blueprint and willingly shared it with numerous aspiring coaches throughout his 40-plus year career: Not simply as a coach, but as an educator. His game plan has always been, still is today and will always be a game plan for life. One of the central components of this “game plan for life” is creating an atmosphere that provides student-athletes with the opportunity to develop as students and athletes, but most importantly as productive citizens who live their lives as caring human beings.”

DeMatteo made his first big impression on the program just days after being named when he lured Coach Donahoe back to the program, pending BOE approval, as the head freshmen football coach; providing the feeder system with a veteran presence and a logical thinker. He followed that move by getting former Mahopac and Cortland grad Dan Neilis to sign on as OL/DL coach (pending BOE approval) #Coup.

“We have a significant amount of work ahead of us with the Mahopac program,” DeMatteo admitted. “The work has already begun. We have been able to solidify two outstanding candidates to work on our staff pending administrative and board approval. The process has begun and we are very excited about the future here in Mahopac.”

While these two moves don’t guarantee a thing in terms of wins and losses, it ensure that DeMatteo is committed to making Mahopac great again from within. He wants a staff that bleeds blue and gold; much like Frank Miele did, much like Teddy Georgalas, Gerry Keevins and Joe Corace did when the Indians were the envy of Section 1 before the turn of the century.

Let’s have at it!

HOW BOUT THEM RED DEVILS – Yeah, Peekskill made a splash last week, too, naming former Yorktown grad Adam Lodewick to replace legendary Lou Panzanaro as its athletic director. Lodewick, a two-time NYS football champion in 1993-94, is a motivator, and he’ll need every ounce of what he has in order to change the culture at Peekskill, which has sort of lost its identity since 2010 on. The girls’ basketball program has been the one constant in a sea of uncertainty; despite the fact that is seems to change its coach every year since the release of Rodney Headley Jr. back in 2014. The boys’ hoops program, a statewide juggernaut for decades, is a shell of its former self, leaving the boys without distinctiveness and little relevance to be quite honest.

Lodewick’s first order of business will be finding a new girls’ hoops coach after an embarrassing display last winter when the Red Devils were eliminated from the playoffs by host Tappan Zee and then went ballistic on one another, parents included. That is not the culture Lodewick will stand for as he bolts from Hastings and makes hay toward Peekskill with the immediate appointment.

“I could not be more excited for this opportunity,” said Lodewick, a Yorktown midfielder on the 1993 NYS lax champions. “Peekskill is a tradition-rich community that rallies behind its programs. With my experience, I hope to build on what others have done to help make the programs there as successful as they can be.”

Seems to me, Henry Taylor, a Peekskill grad and two-time Section 1 championship boys’ coach at Lincoln Hall, who was recently released by John Jay CR, would be the route to go with the Lady Red Devils, who are only a few years removed from having won three sectional titles in four years. It is my understanding that Taylor has thrown his hat into the ring for consideration. The BOE would be nuts to throw it back at him. Taylor will restore law and order and the Lady Red Devils will play hard for him.