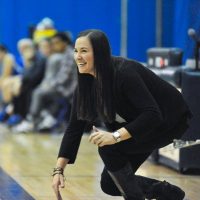 PV girls’ hoops Coach Kristi Dini will have 100 wins by week’s end, most likely today in win over visiting Croton.

All she does is win, or so it seems. Wherever Putnam Valley girls’ hoops Coach Kristi Dini has hung her hat as a player/coach in Section 1 – and college ball for that matter – the record-setting sharpshooter, in her own right, has produced miles of triumph.

And by the time you’ve read this story, Dini, barring an epic upset by Croton-Harmon last night, will have secured the 100th victory of her varsity coaching career. After a brief stop at Briarcliff (12-7), and a record-setting four-year run at Somers (62-22), the stars aligned in the fall of 2016, and Dini returned to her heyday roots at Put Valley (26-7), where she became the school’s first one thousand-point scorer in 2005. In those three coaching venues, Dini has maneuvered the route to 100 wins quicker than most.

In Jeopardy, they would file the phrase “Kristi Dini is easy to play for” under the category: “I’ll take, ‘Things Nobody Ever Said’, Alex.”

Dini, an NCAA deadeye-shooter at Boston University, demands a lot from her players, but those that do withstand her old-school methods are better for having done so. Most days, you won’t find Dini coddling players or cozying up to parents and administrators. That’s not her deal, and more than likely part of the reason she’s not coaching at Somers after a record-setting tenure that saw her dismissed, very unceremoniously, after a 19-3 season.

Her days at Somers, while memorable, are blocked out by her success at Put Valley. The fact that Dini will get to 100 wins on the floor she ran back in 2005 as an All-NYS player, isn’t lost on her.

“I enjoyed my time at every stop along the way, but my entire focus is on Putnam Valley now,” said Dini, who led the nation in three-pointers at BU back in 2009. “I still maintain unreal relationships with people from Briarcliff and Somers, but it’s all about PV now. We think we can do something really cool this year.”

Teaching the X’s and O’s of basketball, drawing blood from a stone and getting the most out of the youthful Tigers (who have zero senior starters at this point in time) are the things she does at a very rewarding clip. Her contemporaries will attest.

“Kristi is a driven, hard-working competitor,” said Ossining Coach Dan Ricci, winner of eight Section 1 Class AA titles, seven regional championship and four state jewels. “She loves the game and it shows when she coaches. Her teams are always well prepared and that’s a credit to her. She gets the most out of her kids, and that is all you, as a coach, can do. I had the pleasure to see her team play this year and I was very impressed with them defensively. It was obvious they were well coached and knew what they were supposed to do.”

In preparing her players to be in a position to succeed, Dini’s tough-love approach is something that takes getting used to from today’s players and parents, who are a different breed from yesteryear. Some kids are cut out for it, some simply aren’t ready to accept the old-school approach that prior generations were not only raised on, but thrived upon. In a new generation of emotionally fragile folk, everything has to be watered down because it’s “offensive”, including the truth, but that’s the Dini mindset: truth, justice and her way. In this day and age of appeasement, it could, ultimately, lead to a short shelf life like it did in Somers.

“Not everyone likes the tough-love approach, but that’s how Kristi learned the game and she must be true to herself,” said Ricci, who coached Dini to consecutive gold medals at the Empire State Games and wrote many of the freshest chapters in the book of tough-love. “Coaches like Kristi and I learned a long time ago that we have to be true to ourselves, or the kids would see right through us.”

The message is quite clear for those who come under her wing. From the youngest levels of Dini’s highly successful NY Extreme AAU programs, to the camps she coaches in the off-season, to her varsity club, which currently sports a 9-1 record and a No.3 seed in Class B: Work beyond your means and don’t take shortcuts when it comes to personal success and else anything in life…

The MAHOPAC BOE’s hiring’s last week of Anthony DiCarlo as Superintendent and Myk Lugbauer as its baseball coach are two of its great recent moves, including the hiring of Dom DeMatteo as football coach, Tim Donaghy as ice hockey boss and Joe Bucello as boys’ lax coach. There are still significant primary moves to be made to “Make Mahopac Great Again” but these were necessary steps in the progression of Indian pride and restoring the Mahopac many of us were raised on…

Mahopac will host the annual Peter Caruso Wrestling tourney this Saturday morning and this year’s tournament is the largest sporting event in Mahopac, outside of its hosting the Section 1 football championships.

“We picked up a few new teams for a total of 18 teams and have now formed a waiting list for those looking to compete,” said John Caruso, who holds the tournament in honor of his deceased son, Peter, a former Mahopac grappler. “Most of last year’s champions were underclassman, so we have many returning champions and expect a great day of wrestling.”