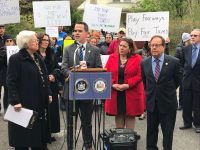 At a rally right outside the Trump National Golf Club in Briarcliff Manor Sunday, local residents protested unfair low assessments so private golf courses could pay decreased taxes. About 45 residents from Ossining and Briarcliff and members of Indivisible Briarcliff-Ossining heard state and local officials explain two pending pieces of legislation that, if signed into law, would arm municipalities with the power to end inequitable assessment practices that favors private golf courses in Westchester and those throughout New York State.

“We are looking to pass legislation to protect property taxpayers and school districts,” said Senator David Carlucci (D-Rockland/Westchester) who is sponsoring the state Senate version of the bill, S.4420. “We want to make sure golf courses throughout Westchester and the state are paying their fair share of taxes. We are trying to close the loop hole that currently exists.”

The legislation was originally introduced by Assemblywoman Sandy Galef (D-Ossining) last year, but her bill (A.6444) was stalled in the Republican controlled legislature. This year, under Democratic control, Galef’s bill was approved by her Assembly Property Tax committee March 19. It goes on to be reviewed by the Property Tax committee, the Codes Committee and the Ways and Means Committee. Carlucci’s bill was proposed in March and is currently in the Senate’s Local Government Committee.

“We have a real big problem,” Galef told protesters. “We have a multi-million-dollar problem. How do we go about solving it?”

Galef seeks to model the new law after New Jersey’s current assessment policy. “Their law says golf courses can be assessed based on the highest and best use.”

The legislation was re-energized when the Trump National Golf Club sought to slash their property taxes by 72 percent over four years. Currently the golf course owes the town of Ossining $487,000. Trump National claimed the course was worth $14 million while Trump’s financial disclosure valued the course at $50 million. The 40-acre course with its 75,000-square-foot clubhouse charges initiation fees of about $50,000 and annual dues about $20,000.

Similarly, the Apawamis Club in Rye and Harrison reduced its tax bill 50 percent in 2017. They received refunds of about $900,000 for overpaying after their taxable value dropped from $23 million to $14 million. Apawamis membership initiation fee is around $69,500.

The pending legislation, if enacted, is an “opt-in” law that would allow municipalities to assess different clubs and courses in their jurisdiction according to how they are used.  Galef said, “It would give communities the ability to have public hearings to determine a fair evaluation of a golf course and hear all sides, pros and cons. Then the town board would decide if they wanted to move forward and adopt the legislation. I think every community will do something different.”

Reportedly, opposition to the legislation have been golf course owners claiming the new law would put numerous courses out of business. Proponents include the New York State Club Association and national organizations like We Are Golf. Wary of the legislation is Assemblywoman Amy Paulin (D/Scarsdale), and state Senator Shelly Mayer (D/Yonkers), along with state Senator James Gaughran (D/Long Island).

“We’re not trying to put any one out of business,” said Carlucci. “The current law uses the same calculations to assess municipal golf courses as it does more opulent, private golf courses, such as Trump National. The reality is this legislation gives towns and villages options to assess golf courses and country clubs at an equitable rate.”

The rally had significant political overtones mostly expressed by Indivisible Briarcliff-Ossining. “I believe that private golf courses such as Trump National should pay taxes based on the real property value,” said Margaret Cucchiarella of Indivisible. “They shouldn’t pay on a value they arbitrarily decide on when it’s time to pay taxes and then increase that value when you have to show your net worth.”

Holding signs of support for the proposed legislation were Croton resident Cliff Weinstein and Ossining resident Chuck Bell. “It’s important for private golf courses to pay their share and build up the tax base,” said Weinstein.

Zegarelli downplayed the political nature of the proposed legislation.  “From our prospective here in the village, this is a fairness and equity issue that has nothing to do with politics,” Zegarelli said. “Our village has hired their own appraiser to separately reappraise both Sleepy Hollow and Trump National. And it looks like the New York State Conference of Mayors are looking at this issue more seriously.”

“This problem started in the early 2000s,” said Galef. “We didn’t have these issues until our judges started looking at our municipal golf courses and private courses as the same. They certainly aren’t the same. Sleepy Hollow has a restaurant, an equestrian center, a hotel — it’s nothing like the municipal course Hudson Hills here in Ossining. You just can’t compare the two. Our objective is to have fair and equitable treatment with all of our golf courses.”

Galef urged people to write letters and reach out to their representatives. “I don’t think we should stop shouting until private golf courses pay their fair share,” she said.