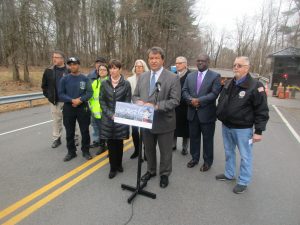 George Latimer, surrounded by local and county officials and several first responders, asked the New York City DEP to reopen Kensico Dam Road over the dam, but the county’s request has been rebuffed by the city.

The DEP closed the less than quarter-mile span over the Kensico Dam shortly after the 9/11 terrorist attacks to ensure the security of the dam and protect the water supply to millions of New York City residents. The road was a frequently-used shortcut for drivers between Valhalla and North White Plains, particularly volunteer fire department and ambulance corps personnel from the two communities that frequently provide one another with mutual aid.

Surrounded by several local officials and emergency responders on the Valhalla side of the road, Latimer said he requested that DEP Commissioner Vincent Sapienza allow the county to present a plan to be reviewed that would reopen the road to ease traffic congestion during peak hours while also protecting the health and safety of Westchester and New York City residents.

“We recognize that this road goes across the dam that holds back thousands of gallons of water,” Latimer said. “We understand that it is a very important dam to secure for the health and safety for hundreds of thousands of Westchester residents. But I also know that all across America, roads of strategic importance, roads that connect one side of a place to the other side of a place might also be targets for terrorists, and in some fashion those bridges are secured in a way to allow their use.”

However, DEP spokesman Adam Bosch, citing Sapienza’s response to Latimer in a letter to the county executive on Mar. 5, said there is no chance the agency will reopen the road.

“New York City will not consider any proposal to allow vehicles on Kensico Dam,” Bosch said. “This would present an untenable risk to the water supply for more than nine million people in New York City and Westchester County, and to public safety for those who live, work and recreate downstream of the dam. The imperative to protect our water supply infrastructure, public safety and public health far outweighs any other consideration.”

In Sapienza’s letter, which the DEP made available, the commissioner pointed to the $5 million traffic upgrade project it has undertaken to improve eight intersections in Mount Pleasant and North Castle near the dam. That project is in the midst of being done, Bosch said.

The county’s law enforcement would also help devise a plan to help ensure public safety, Latimer said. He said that other potential targets such as the Golden Gate Bridge or the Verrazano Bridge which pose even greater challenges to keep safe, are kept open. The road should not be open during the evening, he said.

North Castle Councilwoman Barbara DiGiacinto said the town’s chief concern has been making sure first responders can reach emergencies as quickly as possible, especially when there is congestion during peak travel times.

“We’re very concerned with the fact that this road closure does sometime impede our first responders,” DiGiacinto said. “In addition, the residents of North White Plains as well as business owners really suffer, particularly during morning and evening rush hour. I know that safety is, without a doubt, a prime consideration for all of us.”

Mount Pleasant Supervisor Carl Fulgenzi said he understood the fear following 9/11 and the DEP’s decision, but it’s time to take another look.

“I do agree with the county executive that eliminating certain types of vehicles and hours of operation could be a major benefit,” Fulgenzi said.

North White Plains Fire Commissioner Matthew Manfredi said New York City officials have repeatedly cited that the dam is a security threat but local officials haven’t been shown proof that it can’t be secured with the road opened during certain times of the day.

“I’d like to see those studies that they reviewed, the assessment studies and all the other stuff,” Manfredi said. “We never got to see that information that they received 18 years ago.”