Skip to content
The Examiner
February 28, 2017 Martin Wilbur Rob Astorino, White Plains
We are part of The Trust Project

State Sen. George Latimer (D-Rye), Assemblywoman Amy Paulin (D-Scarsdale) and Assemblyman Thomas Abinanti (D-Pleasantville) all recently confirmed that they have been approached by supporters to consider a run in this November’s election.

If one or more of the lawmakers decide to jump into the fray that would trigger a primary in September against County Legislator Kenneth Jenkins (D-Yonkers). Jenkins was the first Democrat to announce his candidacy last August in hopes of unseating Astorino.

The would-be candidates agreed that opposition to President Donald Trump’s administration has motivated large segments of the population.

Paulin, who will make her decision within a few weeks, said the political climate since Election Day has sparked Democrats’ interest in vigorously contesting political races at all levels of government to have people in office who share their values.

As a local organizer for the Women’s March in Washington the day after Trump’s inauguration, the assemblywoman said she met people who have never been involved in politics before but are suddenly active.

She said Astorino has identified too closely with the president on some issues.

“Rob has a very different perspective. He’s a very conservative Republican whose positions are very much aligned with Donald Trump,” Paulin said. “You don’t know if you want that in the local (area) when there’s a fear that the federal government will be coming in and taking initiatives that are against what most people believe in Westchester.”

Paulin said her decision would be based on whether she is prepared to wage an effective campaign, not on whether to avoid a tough primary battle. She said in her first election for Assembly she was victorious in a contentious primary.

Abinanti said Democrats received a wakeup call after Trump’s victory, but the issue in the county executive’s race is finding the right candidate to deliver the right message.

He said that Astorino has delivered an easy-to-understand message that has resonated with the public – holding taxes in check.

“He has a very simple message, but the question is what has he done?” Abinanti said. “I don’t see anything. I don’t see anything that he has talked about and said, ‘We made this better, we made life better for people over here. We made life better for people over there.’ There are additional jobs but it’s happening kind of on his watch, but he hasn’t really done anything to stimulate it.”

Latimer said he will decide by early April whether it is feasible for him to run what will be a tough campaign against a popular and seasoned politician in Astorino.

“It’s going to be tough,” Latimer said. “Astorino has run twice and won twice. He’s a very talented politician. He ran for governor. It’s not going to be easy.”

Jenkins said he isn’t surprised by the burst of interest in the race with the political angst nationally. A primary race won’t splinter the party in Westchester but is healthy for Democrats, he said.

A political spokesman for Astorino said the county executive has demonstrated his ability as an effective leader since 2010, delivering on his pledges to lower taxes and spending and delivering government services in a more efficient manner. He’s twice won comfortably in a county with a roughly 2-to-1 Democratic registration advantage, including a 13-point victory in 2013.

“County Executive Astorino believes in the old-fashioned notion that good government equals good politics, that if you work hard, keep your promises and produce positive results voters will want to keep you around,” said spokesman Bill O’Reilly.

O’Reilly said he isn’t surprised at the strong Democratic interest, which is also being bolstered by the fact that with county government term limits, this would be Astorino’s last term. Some of the Democrats could be positioning themselves as their party’s frontrunner for 2021, he said.

Abinanti said the challenge for Democrats is to take the current energy and transform it into a strong voter turnout in an off-year election, something they’ve been unsuccessful at accomplishing. Hillary Clinton received more than 270,000 votes in Westchester in November, but in 2013, Democratic nominee for county executive Noam Bramson collected about 80,000, he said.

Meanwhile, Astorino received 103,000 votes four years ago, not much of a drop-off from Trump’s roughly 130,000 votes in November. 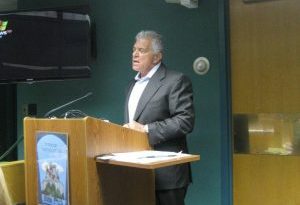