Sue Larsen no longer has to worry about rushing out of the house each morning to go to work, so she can now indulge herself in her true passion.

After years of splitting her attention between her full-time work as a human resources professional and as a singer-songwriter, Larsen retired three years ago at 57, to devote herself full-time to her music career and see where it leads her.

The North White Plains resident is releasing her third single this Friday, a song titled “You Will Always Be There.” It will eventually be one of 10 songs that will make up her album “Life’s Work.”

“I’m doing it because I have a passion for it, because I want to create,” said Larsen, who began playing in bands as a teenager. “I’m not attached to the outcome. I don’t have this pre-set notion in my head of what is supposed to happen or not happen.”

Becoming a rock star more than 40 years ago may have seemed like the end-all and be-all for Larsen. She chased that dream for about seven years, performing at clubs in the city and down the Jersey Shore, playing bass, guitar and piano before deciding to get a “real job.”

For years, she played weddings and parties, and later performed at nursing and rehab centers sometimes more than 150 times a year. But Larsen never lost the burning desire to write and record her own music.

She realized that at her stage, she would have to do everything herself – playing all of the instruments, recording each track separately, then mixing and mastering it into a finished product. Larsen now also produces her own music video for each song and does her own marketing, the ultimate one-woman band.

In early 2019, Larsen established her own publishing and recording company, Bijoux Music Group LLC. The most challenging part was the steep learning curve when trying to operate all the equipment.

“I retired from my day job at the end of 2018,” said Larsen, who grew up in Rye, the daughter of a trumpet player who took piano lessons for many years as a kid. “I didn’t start recording until the winter of 2020. The learning curve was incredible, not only for the software, but the mixing, the mastering of an actual recording. I also had to brush up on instruments I had not been playing since I was predominantly going into the therapeutic milieu and playing guitar.”

She released her first single, “Sleeping Alone Again,” last December. The song was on Pandora’s premium services and received some radio play around the country. Not bad for her first attempt out of the box.

The second single, “Hardly Hiding,” which came out earlier this year, was featured on the local artist’s segment on WHUD, where Larsen was interviewed by on-air personality Andy Bale.

For Larsen, the pandemic forced her to concentrate on her music with few other distractions.

Larsen always records the rhythm tracks first. The drums help inspire the rest of the song, she said, followed by the bass and the vocals. The ancillary parts, any strings or brass, are added later.

“If you’re lucky to have three of four musicians with you, then you throw it all together,” Larsen said. “Of course, that happened all the time in the ‘70s and ‘80s, but now people are recording each other’s digital files, which I can do, too.”

Larsen has continued to write her own music, some of which dates back decades. But there were insecurities to overcome.

Now that Larsen has completed her first three recordings, she doesn’t plan to stop. She is going to write a couple of ballads to add to her repertoire.

Larsen is busier today than when she was working full-time.

“It doesn’t feel like retirement, but it feels good,” she said. “It feels good.”

To learn more about Sue Larsen’s music and to hear her first two releases, visit www.suelarsen.biz.

Chappaqua Affordable Housing Proposal May Need to Be Smaller 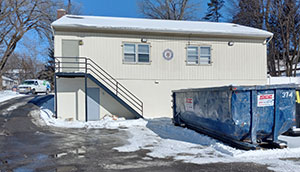