Government The Examiner
August 2, 2022 Martin Wilbur 555 Views 3 min read
We are part of The Trust Project

The New Castle Town Board asked Chappaqua Crossing representatives to supply fiscal and downtown impact analyses before scheduling a public hearing on revised zoning that would increase the center’s allowable carryout restaurant and retail liquor space.

A lack of consensus on the board regarding the two issues prompted officials to hold off on setting a date for the hearing until they receive the additional information. Supervisor Lisa Katz told Summit Development principal Felix Charney, whose company sold the retail portion of the site to the Chicago real estate management firm Haitman last winter, and attorney Diana Kolev that once they receive the material the board can set a date.

Councilman Christian Hildenbrand said it would have otherwise been premature to set a hearing date before the board has had a chance to look at the data.

“I, typically, when we get to this stage, at least the six months since I’ve been on the board, we’d come to some majority consensus to move it forward,” Hildenbrand said. “I don’t think we have with these two points – or the Wright House.”

Katz said that once they receive the report, the town can then schedule the hearing.

“We certainly couldn’t make a decision without that information,” Katz said. “I think it would be helpful for the board to have that.”

Charney had hoped that a hearing could have been set for September. He indicated that the information the board is seeking would be arriving shortly.

“I would guess in a couple of weeks we would have all of that,” he said.

Haitman is looking for relief from several requirements as the process to rent the entire 120,000 square feet of retail space at the former Reader’s Digest site has stalled, particularly attracting sit-down restaurant operators into two spaces that had been set aside for that use. As a result, the company is asking to increase the maximum square footage of carry-out food establishments from 7,500 square feet.

In the spring, one fast-casual eatery, Sweetgreen, opened at Chappaqua Crossing.

Another key request from the operator is to eliminate the cap of no more than 25 percent of a store’s square footage for retail liquor sales. Charney said a liquor store wants to move to the location but cannot do so unless the requirement is lifted.

That matter could be a point of contention because town officials may not want a business competing with other Chappaqua liquor stores in order to protect the hamlet’s downtown.

A third request for relief comes from Toll Brothers, the developer building the 91 townhomes in the project’s East Village, to construct a clubhouse rather than going to the expense to restore the 1850s Thomas V. Wright House. The board must also schedule another hearing if it entertains Toll Brothers’ request.

Relief from the requirement of no outside trash storage is also being sought. On July 19, Haitman appeared before the town’s Planning Board to discuss the possibility of building two trash enclosures, one at the southeast corner of the building housing Life Time Fitness, the second in the retail parking area adjacent to buildings D and E.

The enclosures would be 12 feet wide by 17 feet deep and about six feet high and have an earth-tone brown color in hopes they would blend in with the brick siding of Chappaqua Crossing’s retail buildings, said Matthew Steinberg, a planner consultant for Haitman.

Concerns were raised by Director of Planning Sabrina Charney Hull about losing those spaces.

“We’ve always said there’s enough parking but we need to know that you’re keeping track of it somehow in just looking to the future because if the Planning Board is a proponent of making this change and reducing the retail (parking) by four spaces, we do need to keep track of it,” Hull said.

Charney said a bigger concern was the enforcement of students who drive to Horace Greeley High School, located across the street from Chappaqua Crossing, using their lot for overflow parking

Board Chairman Robert Kirkwood said that the trash enclosures would be fairly close to the residences, perhaps a larger issue than losing parking spaces.

The issue is expected to be put on the agenda for a public hearing before the Planning Board in September. 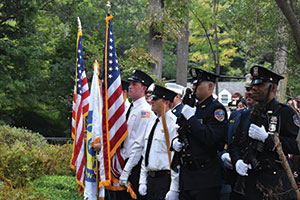 Communities to Commemorate, Remember on 20th Anniversary of 9/11

No. Castle’s DiDonato-Roth to Bid for GOP State Senate Nod