COVID-19 cases continue to edge up in Westchester County and the region but hospitalizations and fatalities have seen little change.

That is the trend that has emerged in recent weeks as the rate of infection has been creeping upward in Westchester and Putnam counties and throughout the state without the high volume of severe illness that has come with previous spikes.

On Sunday, the statewide infection rate was 6.8 percent, slightly lower than the 7.2 percent in Westchester and 9.3 percent in Putnam. The numbers were similar on the seven-day rolling average for each.

Westchester County Executive George Latimer said that while the raw numbers “are not a good trend,” it has been encouraging that the COVID-19-related hospitalizations and fatalities have barely budged the past two months.

“It is clear that COVID is on the rise again,” Latimer said. “It is not on the rise as precipitously as we saw back in the month of December when the Omicron variant came and there was an exponential increase in the number of cases and commensurately in the number of hospitalizations and fatalities. It does not equal the surge we saw in the beginning of the pandemic in March, April and May of 2020, or the holiday surge in 2020 into 2021.”

On Sunday, the state reported 3,417 active COVID-19 cases, more than double the 1,598 cases reported on Apr. 1 and nearly five times the 761 cases on Mar. 1. But hospitalizations in Westchester hospitals due to COVID stood at 67 on Saturday compared with 65 two months earlier. On Apr. 1 that figure had dipped to 41.

Meanwhile, in the seven-day period ending on Sunday, there were six people who had passed away in Westchester compared with five a month earlier and six people two months ago.

Latimer said he believes that the high vaccination rate, while not preventing people from contracting COVID, is doing its job in keeping most people out of hospitals and preventing even more from dying. As a result, Latimer does not foresee any additional steps or precautions from the county other than urging residents to stay current on their vaccinations and bringing a mask along with them in case they are in a crowded area.

“So, we’re hopeful that while the numbers are increasing, we are not in a position where we need to take any aggressive action to change our behavior insofar as mandated actions are concerned,” Latimer said.

Last Thursday, the Board of Legislators approved Latimer’s initiative to cap the county’s collection of its tax on gas sales to 12 cents a gallon starting on June 1. He immediately signed the legislation into law.

The gas tax break will be for the three summer months of June, July and August.

Latimer estimated that the gas tax cap will result in roughly a 20-cent per gallon reduction at the pumps. Between that and the bus fare suspension, most residents should see a small measure of relief this summer.

“It’s a helpful step and it’s a step that we’re allowed to do in county government because the state allows us the authority to do that,” Latimer said.

The state has also suspended its portion of the gas tax for the rest of the year, providing further relief to motorists. The state’s measure will also go into effect on June 1. 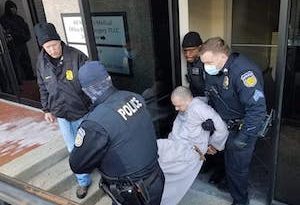 Latimer Confident Phase 2 Will Begin By Next Tuesday