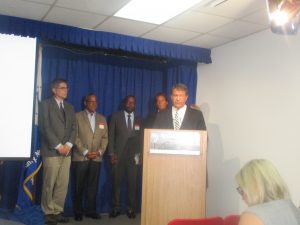 As suicide rates across the United States rise, Westchester County has launched a multi-strategy effort to educate the public on recognizing the warning signs for people at risk and where to turn for help.

On Tuesday, county officials kicked off September, which is Suicide Prevention Awareness Month, with a new messaging campaign that will also target segments of the population that are statistically at a higher risk of suffering from mental health issues and suicide.

“Mental health, substance use, suicide is a public health issue,” said Michael Orth, commissioner of the county’s Department of Community Mental Health. “We want to put it out there as a public health issue, so by educating our community, our workforce, we feel we can make a difference in our county, not only for all to achieve mental wellness but also saving lives.”

The campaign includes a series of public service announcements that are being rolled out that address children and teenagers, law enforcement, veterans, seniors and the business community.

Creation of the hashtag #BeTheLink, the educational campaign addresses how to recognize the potential warning signs of a mental health condition, how to best help someone who may be struggling with mental health issues and how to connect those in need with Westchester County services and supports.

A Westchester County Suicide Prevention Awareness Task Force, consisting of mental health experts and various stakeholders, will be re-energized. The task force is focused on increasing awareness, decreasing stigma and implementing evidence-based training and practices toward the goal of reducing suicide, Orth said.

Also, Westchester is now just one of four counties in the state to be part of a new Suicide Fatality Review Committee. Orth said the county will be working with the state and also Washington County, Ore., which created a fatality committee about seven or eight years ago. The committee will include representatives from law enforcement, the medical examiner’s office, mental health experts and family members of suicide victims to collect accurate data to reveal the causes of suicide and help those in need before suicide is attempted, he said.

For example, in Washington County, the data showed that eviction is a stressor that has led to mental health problems and suicide, Orth said.

“As the numbers are rising throughout our country, their numbers of suicide have gone down significantly,” he said.

County Health Commissioner Dr. Sherlita Amler said parents must think of mental health as urgently as their children having diabetes or another disease. Amler and Orth mentioned that because of either stigma or a lack of understanding, there may not be the same sense of urgency for some parents to seek treatment for their child as if they had a physical ailment.

“You can end up with a child that is a totally productive individual and lives a happy and long life and that’s what we want for any of our children,” Amler said,
“to live a happy, long life, and that is possible with the right treatment, with the right assistance, the right support, so we just have to be willing to put this in the open.”

While suicide rates in Westchester have remained nearly constant over the past five or six years, staying between 66 and 75 confirmed deaths annually in that timespan, that has not been the case elsewhere, Orth said.

He said over the past 10 years, incidents of suicide nationally have grown 27.5 percent and is now the second leading cause of death for those 15 to 24 years old. More than 47,000 Americans die each year from suicide and about 1.4 million people in the United States have serious suicidal thoughts, Orth said.

Other efforts include the establishment of the Mind, Body and Spirit Community Coalition, which will focus on many health issues, said Hassan Bilal, a coalition member. Its first task is to tackle the mental health crisis, he said.

“We aim to do as much as we can, in everything we can, to make sure this situation does not happen to someone else,” Bilal said. “The only way to do that is to work to get the word out, to let people know that there are agencies, individuals and community groups that are there to help them.”

For more information and a complete list of resources and services, call the Department of Community Mental Health at 914-995-5220 or visit www.mentalhealth.westchestergov.com.