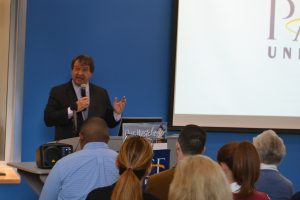 County Executive George Latimer launched Westchester’s 2020 Census Campaign Monday at Pace University in Pleasantville, urging for the need to reach out and account for every person.

Latimer said the Census outreach effort was unlike any he had ever seen.

“This is the first time in my recollection – having lived through six or seven censuses – that there has been an emphasis and a focus on making sure we have a full and accurate account,” he said. “It’s not just [being done by] county government but by educators at all levels, the healthcare field and law enforcement.”

Latimer stressed two key areas of concern for obtaining an accurate Census count: the federal and state grant process, which is gauged by population data, and representation at the local, state and federal level.

Last year, a preliminary estimate of $880 billion in federal funding would be parceled out to state and local governments for several different programs. But new research from George Washington University shows $1.5 trillion in federal funds will most likely go to 316 federal programs. The programs that will be funded will depend on the data.

“There are tens of thousands of people that won’t be counted if we don’t ease the fears among community members, improve accessibility to technology and provide educational outreach,” said Bracco, who is also executive director of Neighbors Link in Mount Kisco. “Now more than ever, we must make sure every community member understands their information is completely confidential and every single person in our county deserves to be counted regardless of race, age and immigration status.”

In October, the Westchester Community Foundation awarded $50,000 to the County Department of Planning to fund the Complete Count Committee. Heriberto Contreras was hired as Westchester’s census coordinator to oversee the program and volunteers and to serve as a liaison with local municipalities.

Listening to the presentation was Robert Chao, former president of the local OCA – Asian Pacific American Advocates, an organization that works for immigration reform and anti-discrimination and teaches about Asian culture.

Chao said OCA has already talked about the 2020 Census to more than 35 parents of Asian students taking Chinese cultural classes on weekends.

“We’ve also talked about the Census with a Chinese-American senior group that meets twice a week at the Greenburg Library,” he said.

Latimer also announced a new partnership between the county and T-Mobile, which is providing access to 200 tablets and 100 hotspots to be used at Census hubs where people can receive assistance in completing and submitting their forms. The county will be establishing these hubs throughout Westchester.

This is the first Census where responses can be submitted online.

Latimer made a general reference to an array of problems that are extremely challenging for governments today, but the 2020 Census shouldn’t be one of them.

“This issue is one that we can do,” he said.