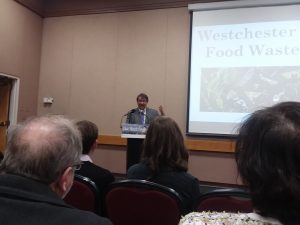 County Executive George Latimer addresses officials and supporters of increasing the recycling of food scraps during a presentation Wednesday in White Plains. The county will be taking steps to step up recycling food waste in the months ahead.

Westchester County is establishing a food scrap recycling initiative where the county will haul away the material for municipalities that have their own programs while the feasibility of a long-term solution is examined.

Under the steps detailed by Latimer, there would be three actions taken this year to encourage more food scrap recycling in the county. Starting in September, the county will take over the transport of food scraps for municipalities that have a single drop-off point and bring the material to a facility in Ulster County. It would be cost-neutral for the local communities, Latimer said.

Municipalities that have curbside pickup for food scraps will be responsible for taking the material to the hauler’s transfer station at their own expense, he said.

A Request for Proposal will be developed to find a hauler, Latimer said. About 20 Westchester municipalities currently have a food scrap recycling program.

Another part of the effort will see the county launch a six-week pilot program in March with a yet-to-be-determined municipality as a test run for the countywide effort by taking the scraps to the Yonkers Transfer Station. Those scraps will be transported to the Ulster County facility for composting.

Finally, the county plans to create a small-scale composting site at the Household Hazardous Material Recovery Facility in Valhalla this summer by accepting food scraps from one municipality. The compost site will also serve as an education center for residents and others in the county to learn more about the practice and provide free compost to residents and the county Parks Department.

While cost estimates aren’t unavailable for the transport of the food scraps because the contract must still be bid, the county executive’s office anticipates the Valhalla compost and education facility to cost about $450,000 while the pilot program would run between $10,000 and $15,000.

Latimer said Westchester must find ways to be environmentally responsible and reduce the amount of waste it generates. About 125,000 tons of commercial food waste and more than 85,000 tons of residential food waste generated each year within the county, comprising about 18 percent of the waste stream.

“We have to do everything we can think of in order to push back on this issue and one of the clear reasons is to expand our recycling and do it in an environmentally sensitive way, and by dealing with the issue of food scrap waste, we are reducing the amount of garbage that we burn making it more economically feasible and a better environment,” Latimer said.

As the county launches the short-term steps, county officials will explore whether one of three longer-term solutions outlined in the Woodard & Curran report can be achieved.

Potential options include installing a small anerobic digester, which breaks down the material without oxygen, next to the county’s Wheelabrator plant in Peekskill, Latimer said. The plant would be able to accommodate only about 10,000 tons of material and is estimated to cost between $5 million and $7 million.

A second possibility would be to use co-digestion to break down the material at the Peekskill Water Resource Recovery Facility. In that operation, the county would be recycling food scraps at the same time other items are recycled.

The county could also consider building its own large composting facility similar to Ulster County. However, that would require about a four-acre site and could cost upwards of $25 million, Latimer said.

“That’s a significant amount of land and size in Westchester,” Latimer said. “We’re looking at a facility that would generate traffic because you’re going to be running product in from all across the county and the issue of odors may, in fact, happen when you have that situation.”

He said having the county assist some of the local municipalities handle food scraps might be a more palatable option.

Nadya Hall, community environmentalist at Teatown Lake Reservation, said despite the challenges it’s crucial the county do what it can to reduce the waste stream. Teatown is partnering with the Town of Ossining on a food scrap recycling program.

“I express my deepest gratitude to the county executive for taking this on and making sustainability a priority and for making these studies a priority for the county going forward,” Hall said.

Local officials whose communities have established food scrap recycling have been pleased with the effort. Mount Kisco Mayor Gina Picinich said her village started its program in November and has about 60 households participating along with the Fox Senior Center.