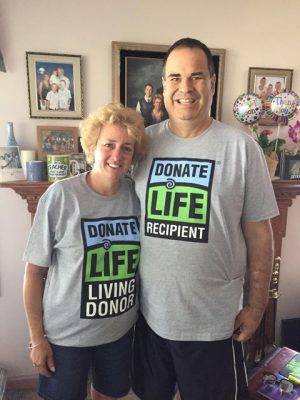 A father and son both in desperate need of kidney transplants received a new lease of life this summer.

The Cancro family of Cortlandt first went public with their household crisis in January in The Northern Westchester Examiner. James Cancro, 53, a retired Fairview firefighter in the Town of Greenburgh, where he served for more than 26 years, suffered kidney failure more than two years ago and had to stop working. He had been on dialysis since, going three days a week for about five hours each session—a routine that sapped his energy.

At the same time, James Jr., 20, a Walter Panas High School graduate and Eagle Scout, had 23% kidney function and was declining drastically. There is a genetic kidney disease in the family called focal segmental glomerulosclerosis, commonly known as FSGS. It’s a leading cause of kidney failure in adults.

“We were getting the word out every which way,” said Lisa Cranco of the family’s efforts to help her husband and son. “Nobody really realized how bad it was until the story ran.”

Other media outlets picked up the Cranco family’s crisis, inspiring about a dozen people to step forward and get tested as possible donors. One of those individuals was Lisa Fitzgerald, 58, a resident of Mohegan Lake and a co-worker of Lisa Cranco at Tom Thumb Preschool.

“I felt like I was put on this planet to help people,” said Fitzgerald, who in the past was a surrogate for her sister’s three children. “It caused me so much pain to see them suffering. I’m very grateful that I was able to do this. If I could do it again to save someone else’s life I would.”

Fitzgerald turned out to be a match for James Sr. and the operation took place July 1 at Westchester Medical Center.

“I came through swimmingly. I couldn’t believe how uneventful it was,” Fitzgerald said. “I’m proud to have done it.”

One month later, on August 1, James Jr. received a kidney from Lynn Ryan, 53, of Ardsley, the wife of a firefighter from Fairview Fire Department where James Sr. worked.

There are more than 150,000 people in the United States living full and active lives with transplanted kidneys

“These two women saved the lives of my son and husband and gave my entire family back the life we used to have. There are no gifts of appreciation that would even come close and a million thank yous would never be enough for Lisa and Lynn,” Lisa Cranco said. “They are both truly amazing and we are so grateful to have them in our lives and part of our family now.”

The family had suffered a rollercoaster of emotions in September 2018 when a kidney became available for James Sr. and an operation took place at Westchester Medical Center. However, there were complications and an infection developed and the transplanted kidney had to be removed after two days.

“A kidney transplant is a treatment, it’s not a cure,” Lisa Cancro said. “Every three months is a milestone. After a year, not that you’re free and clear, you’re more on your way.”

Lisa Cancro said the family was recently able to enjoy a fall day for the first time in several years by going pumpkin picking at an area farm. They and their donors are also planning to attend a National Kidney Foundation Walk November 10 in New York City.

She noted James Jr. has changed his career path and now wants to pursue something in the hospital field.

Once a person’s kidney function drops to 20%, they become eligible to be placed on the federally-run United Network Organ Sharing (UNOS) program, which has a wait time in New York State for an organ match of five to seven years.